Rosalind Early
A crowd gathered for a pro-choice rally in St. Louis.

Thousands gathered downtown in Kiener Plaza today to protest  the potential overturn of abortion rights in America. On May 2, a leaked opinion indicated that the Supreme Court was set to overturn Roe v. Wade and Planned Parenthood v. Casey the cases that made abortion access a constitutionally protected right in America. Abortion is still constitutionally protected in the United States, but a decision from the court is expected in June.

The St. Louis protest, which kicked off at noon, was part of a larger national day of protest with rallies happening all over the country.

My Abortion Helped Me Escape an Abusive Marriage

"I'm sick of these rallies," Mayor Tishaura Jones said at the beginning of the event, which also include U.S. Representative Cori Bush (D-St. Louis). "We sound like a broken record. How many of you all know what a record player is?" There was a wave of hands and she said that when there's a scratch on the record, the needle gets stuck and you hear the same snippet of sound over and over again. That's what was happening today with the fight for abortion rights, which has been dragging on since the Roe v. Wade decision in 1973. "We need to move the needle," Jones said.

She and others spoke about how abortion access is health care and that abortion bans disproportionately affect marginalized communities. Emily, who didn't want to give her last name, says that was the reason she and her friends came out to the rally. 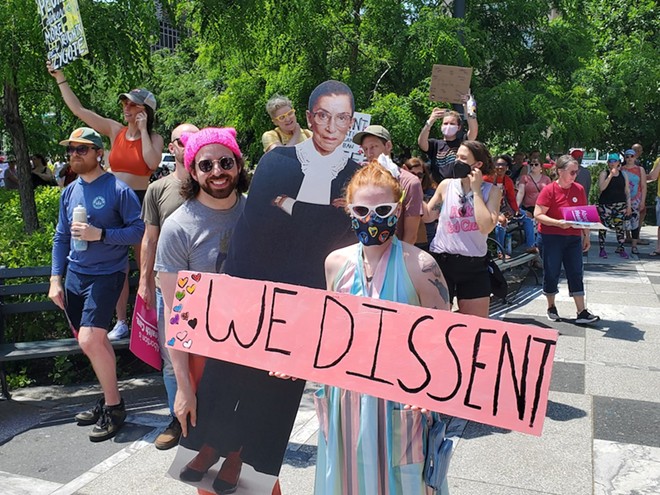 ROSALIND EARLY
(From left) Ryan Cooper and Emily (last name withheld) brought a cut out of Ruth Bader Ginsburg to the abortion rights protest.
"We recognize that not every person will have access to care if we end abortion access," Emily said, pointing out that those with means will still be able to travel to an abortion-friendly state to get treatment. "We wanted to advocate for the right to care for our own bodies."

Jermoni Young and Skyla Owens came out because they want politicians to mind their own business.

"I'm tired of people trying to take away our rights and tell us what to do with our uteruses," Owens said. "It's no one's business."

There were a lot of men present as well. "I have many incredible women in my life and it's been increasingly frustrating to have a front row seat to see it becoming harder to shatter the glass ceiling," Ryan Cooper explained. "So instead of staying home and screaming into the void, I decided to come here and make sure my voice is heard."

ROSALIND EARLY
Jermoni Young and Skyla Owens want politicians to stay in their lane.
Between speakers — who also advocated for paid maternity and paternity leave, universal health care, universal basic income, and other policies to help people raise the children that abortion bans would compel them to have — the crowd was led in chants.

But the major theme of the day was that voting is not enough. The crowd was exhorted to begin supporting candidates who unequivocally support abortion rights and to knock on doors, call and organize in support of those candidates. "No more half-assed engagement," Jones said. "We need to take the fight to the streets because, like my daddy says, the streets always win."