This St. Louisan Has a Front Row Seat to the George Santos Debacle 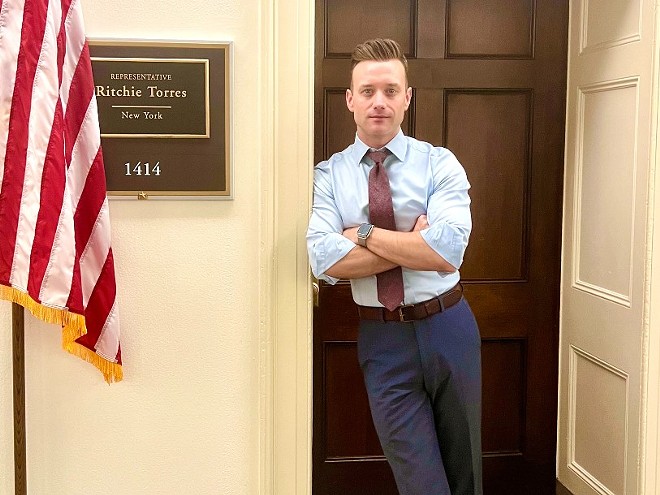 On his second day at work in Washington, D.C., Jacob Long found himself accompanying his boss, U.S. Representative Ritchie Torres (D-New York), to the office of a fellow congressman who has quickly become an infamous household name: George Santos.

Torres, with Long in tow, was there to hand deliver an ethics complaint to Santos. All the major media outlets covered the event, and in the Associated Press' video, you can see Long behind Torres as Torres explains that he's required by the ethics complaint process to deliver the paperwork to Santos in person.

The specifics of the complaint concern whether Santos filed "timely, accurate and complete financial disclosure reports," which, although important, is among the more banal things the Republican congressman newly elected to represent Long Island has been accused of.

In case you've been living under a rock, Santos has lied about his background in finance, his marriage, his college education, his college volleyball career, his criminal history in Brazil, his criminal history in the United States, his mother being in the Twin Towers on 9/11, his employees being among the victims of the Pulse nightclub shooting, and his Jewish ancestry. (Found to have none, he later clarified that he said he was "Jew-ish.") In the past week he's been impersonated on late night TV by Bowen Yang, Jon Lovitz and others.

Before going to work for Torres, Long worked on Trudy Busch Valentine's campaign for the U.S. Senate in Missouri and served as the spokesman for St. Louis Mayor Lyda Krewson. Before getting into political communications he was a news reporter and anchor at TV stations across the country, including at KSDK in St. Louis.

Born in Granite City, the 35-year-old Long says that while D.C. is a really great city, "St. Louis will always be home."

Long says that working on Capitol Hill is "a whole different ball game," and that he's honored to work for Torres. The congressman grew up in public housing in the Bronx, went on to be the youngest person ever elected to the New York City Council and the first openly gay Black man elected to the House of Representatives.

Given that Torres represents a district not far from Long Island, he feels a duty to hold the fraudster Santos to account and in recent weeks has emerged as one of the embattled congressman's chief antagonists. In Long's first week on the job, Torres introduced the Stop Another Non-Truthful Office Seeker (SANTOS) Act. He's held press conferences and done interviews on cable news, all of which is in part his communications director's job to arrange.


✍️NEW op-ed from @RepRitchie for @NBCNews about the threat Santos poses to American democracy.

"He is a master manipulator and liar whose presence among us is beneath the dignity of the offices we’re privileged to hold and the people we’re here to serve."https://t.co/5ppn5gkoiX

"Every time you see your elected representative on television, it doesn't just sort of happen. There's some finagling behind the scenes that I'm responsible for," Long says. "It's a lot of coordinating interviews, amplifying Ritchie's message to make sure that people know that the members of the New York delegation are not going to sit idly by and let this fraud continue."

He adds, "Never in my wildest dreams did I think that the first big thing I would be doing communications on would be the hottest political story of the year so far."

Long's office is in the same building as Santos, who earned more headlines yesterday by saying that someone once tried to assassinate him (and stole his shoes) outside Trump Tower. When asked about the general mood among congressional staffers, Long says, "It does kind of feel embarrassing. Not for us but, you know, for the institution. He's a running joke on Capitol Hill."

However, there have been some brief Santos-free respites.

A few days ago, Long was with Torres walking back from the Capitol when they bumped into Nancy Pelosi, who stopped to have a quick chat with Torres.

"All I managed to get in was a 'Good morning, Madam Speaker,'" Long says. "I know she's not the speaker any more, but I was so awestruck, that's about all I could get out. The first woman speaker, the most successful speaker in American history. I told her good morning. That was a really awesome moment."