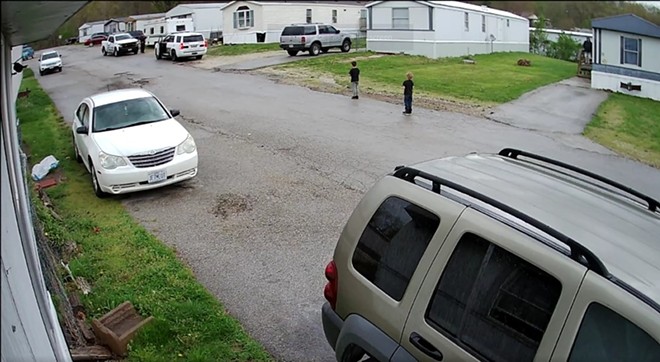 Late in the afternoon of April 26, Lynnette Seamon arrived home to find her dog dead on the ground in front of her Union, Missouri home. Officers had dispatched to the trailer park she lived in for a report of a dog bite and shot and killed Seamon’s dog soon after.

Seamon tells the RFT she was unaware officers were looking for her dog, a young pitbull named Samara that was training to be Seamon’s service dog.

“I started crying,” Seamon says. “I got on the ground to hold her.”

Home security footage of the incident posted on Reddit shows two police officers arriving outside Seamon’s home in two separate vehicles. In the video, two young children are seen watching officers from a short distance down the street. The children run away after it appears the dog was shot. Footage of the actual shooting was blocked by an officer’s SUV.

Seamon says she is a severe diabetic and her dog was in the process of receiving service dog training to help if she had seizures. Through this training, Seamon claims her dog knew several Union police officers and was friendly with them.

“Part of the training was for her to be familiar with people in uniform and not be afraid of them,” Seamon says. “The guy who trained her would take her to the police department almost every single day.”

A spokesperson for Union Police says officers arrived at the trailer court after the department received a call from a trailer-court resident. A 27-year-old white male told police Seamon’s dog bit him as he took his trash to a dumpster in the trailer court.

This was the second reported time the dog had bitten someone, according to a statement from police.

“The pit bull lunged to within a foot or slightly more of the officer when it was shot,” reads Union Police’s statement.

“She’s protective, of course, but never aggressive,” Lawless tells the RFT. “The kids in the neighborhood would always go pet her.”

A representative of Union Police would not say how many times Seamon’s dog was shot or whether it's the department’s protocol to shoot and kill animals deemed dangerous. Seamon claims her dog was shot three times and Lawless says she heard three gunshots, followed by kids in the neighborhood screaming, “‘They shot Samara.’”

Police say officers tried to contact Seamon, though Seamon says she never received a call from police. Rather, she heard of her dog’s death through a phone call from her neighbor.

The dog’s body is currently in the custody of police for rabies testing. Police say an investigation is ongoing.