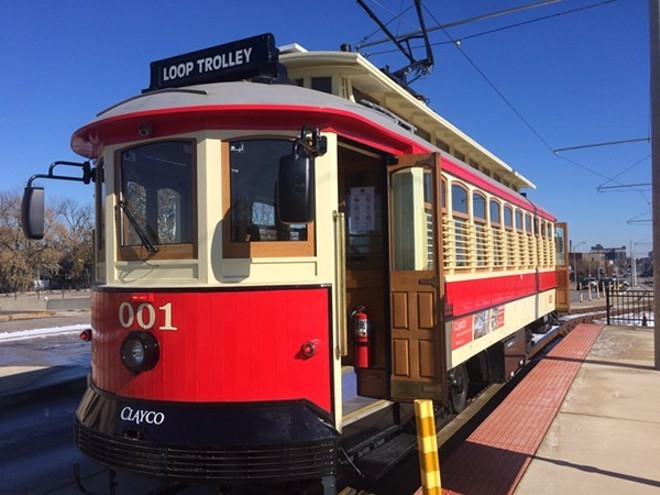 DANIEL HILL
Seemingly nothing can stop the Loop Trolley from clanging on down the line.

The Loop Trolley — that seemingly unkillable basher of parked cars and crasher of innocent bicyclists that has haunted Delmar Boulevard for what seems like centuries now — will resume operation this summer, because man is a fallible creature apparently doomed to repeat the same mistakes over and over again in the face of all logic and reason.

The St. Louis Post-Dispatch reports that the cursed trolley will resume service on August 4. In a fun twist on an old theme, it will now be headed up by Bi-State Development, which also runs the MetroBus and MetroLink. That arrangement began in February, when Bi-State agreed to take over operations on a contract basis at the request of City of St. Louis Mayor Tishaura Jones and Bi-State President and CEO Taulby Roach.

With the resumption of service will come a few changes. Roach tells the Post-Dispatch that the line will only run during warm weather, shutting down on October 15 and starting up again in the spring.

“We have made the professional opinion that it will run better on a compressed schedule,” Roach tells the daily. “We’ve really tried to make a realistic and nonflinching assessment of these assets.”

Considering that the trolley cost more than $50 million in state and federal tax dollars to build and generated only $32,000 in ticket sales before literally breaking down on its last day of regular service, most reasonable onlookers may look at its resurrection with confusion, asking questions such as "Why?" and "How come?" and "To what end?" The answers can be found in the fact that the federal government has threatened to take the money it sank into the project back, a development that would also imperil St. Louis' ability to receive federal grants in the future.

As reported by KSDK, the Federal Trade Commission said in December that it would demand that some of the federal grants used for construction of the trolley — a sum totaling $37 million — be repaid if it did not resume operation by this summer. Mayor Jones has reportedly said that getting it running again could cost an additional $22 million.

Roach didn't hesitate to acknowledge the trolley's failures back in February when the Bi-State deal was announced. "I'm not going to say that it is a super sound project," he said at the time. "Its track record speaks for itself."

But losing out on those federal grants would cost even more than running it, its backers reason, which is why Bi-State stepped in with a plan to run the trolley on a limited schedule.

So the unkillable zombie trolley clangs on down the line, despite everything. Operations are set to run from 11 a.m. to 7 p.m. Thursdays through Sundays, starting August 4. At present, no decision has been made as to whether or not there will be a fare charged for rides.