Send a News Tip
Updated with information from the person who designed the helmet and a possible clue that the new Mizzou hard hat will look "shockingly similar" to the image below.

Yesterday, University of Missouri football coach Gary Pinkel confided to the St. Louis Post-Dispatch that the team's new uniform -- to debut April 14 -- will not feature the "M" that's emblazoned the helmet for decades. 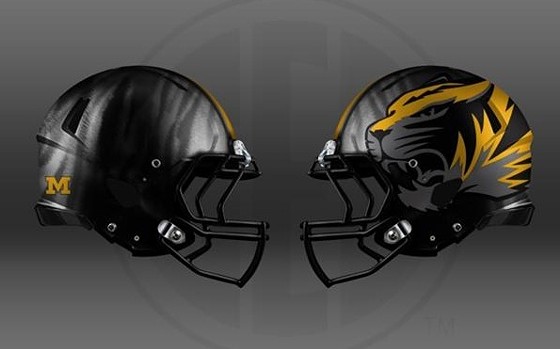 ​Is it the new look of the Tigers? Hard to say at this point. The university has yet to make an official announcement, but it has said that its collaboration with Nike would create a new outfit that's a stark departure from the current uniform. The team wants a new look as it enters the SEC this fall.

Update: So, it turns out that the helmet above was designed by Aaron Lademann, a graphic artist who grew up in Columbia and is a "life-long Mizzou fan." Lademann tells Daily RFT today that he designed the helmet (and several others viewable on his website) in mid-December and posted them on a Mizzou message board.

"I did it just for fun," says Lademann. "There was a lot of speculation as to what the helmet would look like. So I spent a few hours coming up with what I thought could be a realistic design."

The images then migrated onto social media. But here's what's really interesting:

portfolio.aaronlademann.com
After his initial helmet design (Version 1, pictured to the right) was posted online, Lademann says he got a call from Don Barnes, the equipment manager for the University of Missouri football team who Lademann knew from the mid-2000s when he worked for a sign company that contracted with the school.

Barnes asked Lademann if the giant tiger logo he designed could work as a decal, or whether it would have to be painted onto the helmet. Lademann says he has since heard from several people with access to the new uniform that the helmet Mizzou has chosen looks "shockingly similar" to Lademann's Version 2 helmet (the one featured at the top of this story).

"I've also heard that they have three or four helmet designs that they'll wear with different uniforms, so who knows?" says Lademann. "But if they did go with my design, I'd like to be able to state that on my website. I don't want any payment. Just to be able to say that I influenced the helmet design would be cool enough."