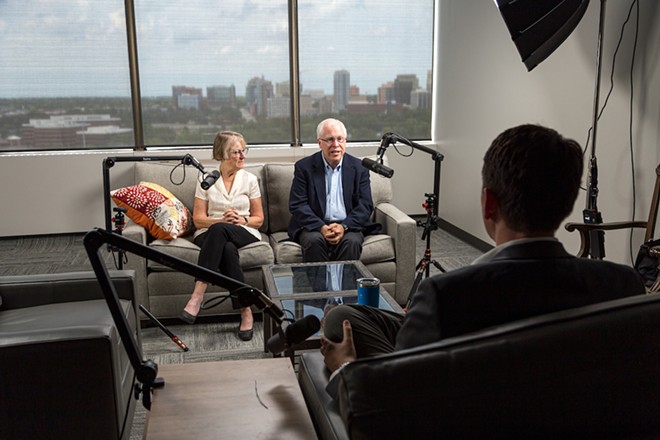 COURTESY OF LEGACY INTERVIEWS
Vance Crowe interviews a couple from Legacy Interviews' studio, across the street from the St. Louis Galleria.

It all began, surprisingly, with an interview Vance Crowe conducted as a goof with a 6-year-old.

The former director of millennial engagement for Monsanto, Crowe has built a business as a public relations consultant and public speaker focused on agricultural topics, and a part of selling his brand is the Vance Crowe Podcast, which he recorded from the basement of his home in Ladue. A listener had come by for a tour, his six-year-old son in tow, and Crowe showed them the studio. Just for fun, he interviewed the kid — and then sent the dad an audio file a few days later.

He didn't think anything of it until later, when he heard from the listener. Playing a party game, the man was asked what he'd take if he could save only one thing from a fire. "I knew instantly it was the interview you did with my son," the listener told Crowe. "That was something I could never get back."

From there, the idea for a business was born. What if Crowe and his business partner, Ben Anderson, would offer to record video interviews for paying clients? What if, instead of six-year-olds, Crowe put his podcast-honed interviewing skills to work drawing out grandmothers and grandfathers, and mothers and fathers, creating a lasting artifact for their families? 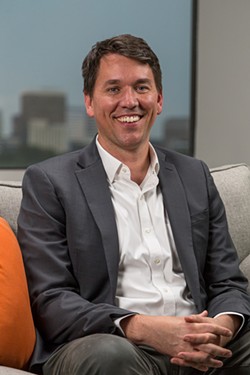 COURTESY OF LEGACY INTERVIEWS
Vance Crowe.
That was the idea behind Legacy Interviews — and strictly by word of mouth, it's grown from its November 2020 launch into a thriving business. Crowe says he's conducted 80 interviews for the service — each taking several hours and then being lightly edited before being shared with the clients and their families.  Some people, drawn by Crowe's podcast, make trips to St. Louis specifically to use the service. Crowe has since moved the business out of his basement and into a professional studio in Richmond Heights — the better to handle all the people wanting to tell their stories.

Stories, Crowe says, are the key to the enterprise. He divides each interview into broad categories: childhood, career, marriage, parenting and then the question of legacy. He likes to ask questions that get at the heart of life experience. "What is the most difficult lesson to learn that was the most valuable to know?"

After years of podcasting, the interviewing part comes easily to him — "I was always good at having conversations with people," he says. He finds people usually have something they want to share, and he's good at drawing them out to say it.

"There's a lot you get to say in this room," he says, gesturing around the comfortable studio, "that people want to say, but rarely have the context."

Interviews are offered as either a half-day for $1,500 or a concierge session, which includes interviews with more than one person (often, a couple interviewed separately and then later together) over the course of a day for $4,500.

At the end, most people want their interviews posted to the company's private YouTube channel, where they can then share the link with family and friends. But Crowe is also mindful that YouTube may not be around forever, so interviewees also get a copy on an M-DISC, built to last 1,000 years.

Some people plan to leave the interview to be watched after they're gone, but Crowe encourages them to instead share it before it's too late. He says the most gratifying part of the job is the letters he gets from family members after they've watched the interview.

"The letters we get from people ... 'I didn't know anything about my dad,' 'I didn't know he felt this way,'" he says. "It's a really profound thing to not wait until your parents are gone to have this experience — and to keep the conversation going."