In Edwin Drood, There Are So Many Ways to Die 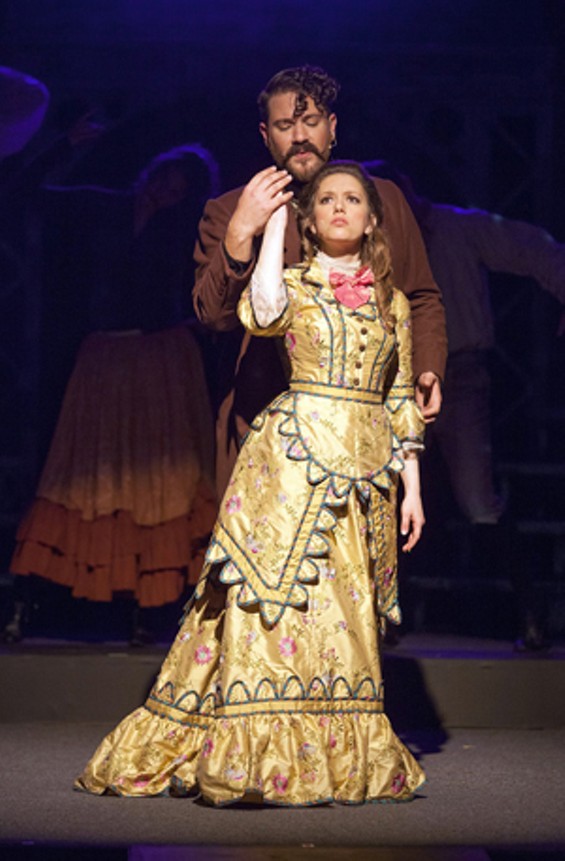 Everything comes in twos in Rupert Holmes' jolly musical The Mystery of Edwin Drood. All the actors play two parts, all of the characters have hidden second natures, there are two acts. Even the stage itself is split down the middle, with one half of the house orchestra sitting on each side. The play also has two speeds — funny and funnier.

Holmes credits Charles Dickens with the original plot, which comes from his unfinished murder mystery. (So there are two writers, if you're keeping score.) Holmes sets the action in Dickens' time, and uses the play-within-a-play technique to establish the main theme, which is the duality of man. Each actor portrays a Victorian actor who plays a character in the play, which allows the cast to follow the theatrical standards of the time. These standards require leading players to receive introductions and a list of recent successes when they enter a scene, and allow them to "step out" of their main role for superfluous bows and to harangue the audience for more applause than is decent. Director Justin Been and cast take this set-up and run with it, wringing every possible laugh out of the needy (and highly competitive) Victorian players.

Zachary Stefaniak stars as Clive Paget, who plays the villainous John Jasper, a choirmaster with a bad opium habit and an unseemly desire for his nephew's betrothed, Rosa Bud (played by "Miss Deirdre Peregrine," who is played in real life by Eileen Engel). Said nephew is the titular Edwin Drood, assayed by the great male impersonator Miss Alice Nutting, who is really Heather Matthews. Any confusion is quickly dispelled by the aforementioned habit of in-character introductions and applause breaks, which allow the audience to catch up. Sit on your program to avoid the temptation to look up names, because you're likely to miss something onstage, as the ensemble has a habit of engaging in silent spats with the lead actors.

The costumes, which are designed by Engel as well, are sumptuous and colorful. You get a good look at 'em, too, as Rob Lippert's clever stage set includes a catwalk into the audience.

Matthews and Engel both have beautiful, clear voices, which they put to good use in their duet "Perfect Strangers." Engel also delivers a spine-tingling performance of the play's love/madness theme, "Moonfall," with the madness coming from Jasper/Stefaniak's lustful pantomime capture of Rosa/Engel as she sings in front of him.

This love triangle is knocked out of balance by the arrival of the mysterious Landless siblings, Helena and Neville (Kimberly Still and Kelvin Urday). Neville, who is as cocky as Drood and quicker to anger, takes a fancy to Rosa and the men soon become rivals, making him a key suspect when Drood disappears.

But then everybody in the play is a suspect. Holmes leaves it up to the audience to determine who killed Drood, and also lets us decide who will end up as happy lovers. The play has 400 potential endings, and in my performance, after the quick and painless voting process, we soon discovered that Rosa Bud did the deed, thinking she was killing John Jasper. The Landless siblings ended up as the lovers, which resulted in Kimberly Still singing through a faux-disgust leer at the audience, and rightly so.

In the interest of full disclosure, I was really pulling for Bazzard (Michael A. Wells) and the Princess Puffer (Lavonne Byers) to get together. Bazzard is a life-time bit player who dreams of stardom, and he gives the most abashed little nods of acknowledgment for the applause after he stops the show to sing his own composition, "Never the Luck." Puffer runs the opium den, and Byers plays her as a Cheapside version of Marianne Faithfull as she growls her way through the chorus of "The Wages of Sin," insulting the audience and berating the band at the same time. Ah, well. There's always next week.