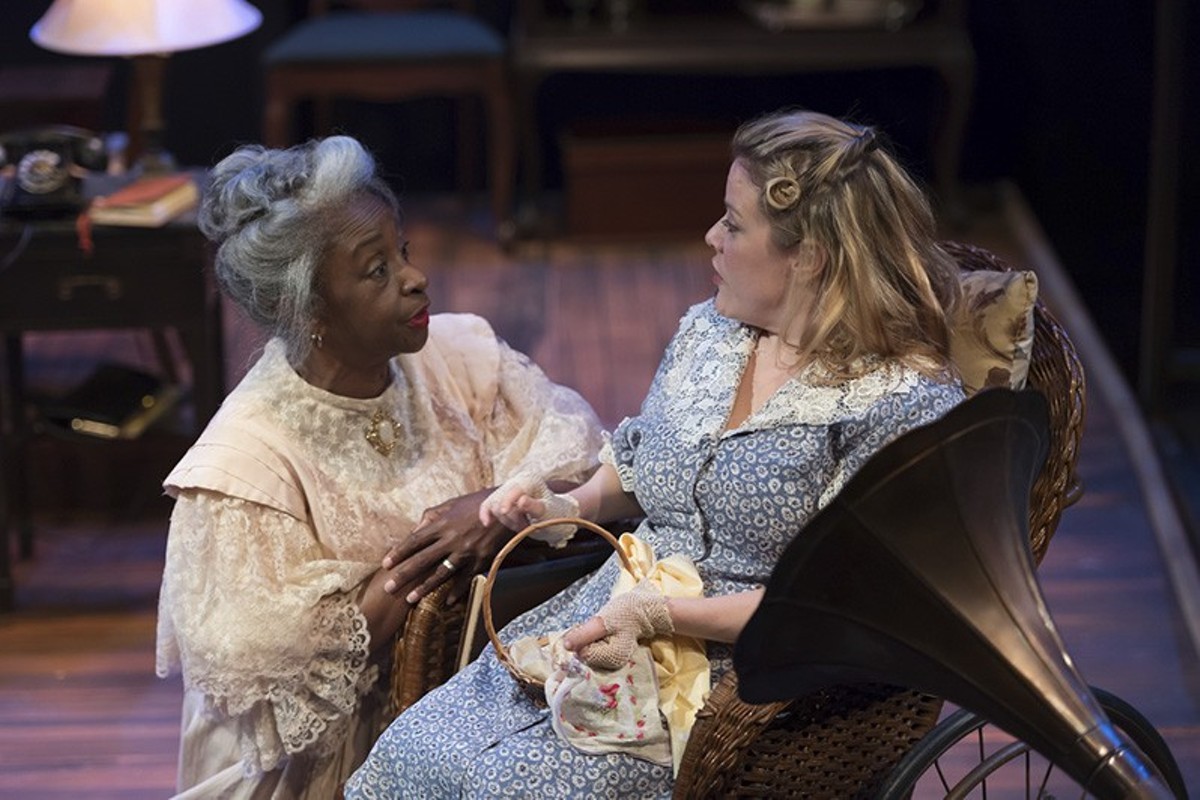 Presented by Upstream Theater through May 14 at Kranzberg Arts Center as part of the inaugural Tennessee Williams Festival St. Louis, which takes place Wednesday through Sunday (May 11 to 15). Visit www.twstl.org for the full schedule.

It's indicative of how much Tennessee Williams hated St. Louis that he dubbed it "St. Pollution." He had his reasons: After an idyllic childhood in Mississippi, his family moved into a dim, crowded apartment in the Central West End, followed by one in University City, where he went to high school. Young Tom (this was before Williams adopted his theatrical nom de plume) went off to Mizzou for college, but returned without graduating to the dismal apartment on Enright Avenue, which was just a block north of where the Tivoli Theater is located today. His sister was sliding into neurosis and isolation; he worked as a sales clerk for a shoe company and hated it.

Years later, that difficult time inspired Williams' first critically acclaimed play — the toast of 1945 Broadway, The Glass Menagerie. His younger brother Dakin would later describe the play as "a virtually literal rendering of our family life at 6254 Enright Avenue."

He couldn't have meant it as a good thing. The narrator, Tom, famously describes The Glass Menagerie as a memory play, but the memory that infuses his telling is guilt — guilt at having gotten away, at abandoning his mother and sister. Tom longs for adventure, but pursuing it means the electric bill goes unpaid and, ultimately, that his family loses its tenuous hold on financial stability. St. Louis, in this play, represents the nightmare Williams abandoned in his pursuit of bigger and better things.

And so it's a bit ironic that a smart new production of The Glass Menagerie, now at Upstream Theater, kicks off the first inaugural Tennessee Williams Festival St. Louis. Hometown boosterism, this play is not. But it's also a smart choice, and not just because of the local angle. As directed by Philip Boehm, The Glass Menagerie feels just as sharp, and relevant, as ever.

Indeed, you might be tempted to dismiss Menagerie based on how popular it's become with high schools, but this production shows just what a mistake that would be. Williams would go on to write pieces that were more sensational, more searing — but he never wrote anything that felt more true.

Staged in the Kranzberg's large black box, Upstream's production gets a kick from its colorblind casting and the bravura performance of Linda Kennedy as Amanda Wingfield. The part is, of course, the best in the play, and Kennedy is incredibly good in it — her Amanda is less silly, and more sympathetic, than others you may remember. The gentleman caller, Jason Contini, shines, while Sydney Frasure and J. Samuel Davis are also both quite good as the Wingfield siblings, if not fully believable as brother and sister. Davis is at his best going head to head with Kennedy; that you root for both of them only makes the ending even more devastating. They cannot both get what they want.

Has there ever been a better closing monologue than the one Williams gave his alter ego in The Glass Menagerie? You might have seen the play a half-dozen times already; you might even know those closing lines by heart. But when Davis as a much older Tom, haunted still by his sister's memory, begins the speech, you suddenly notice the beautifully evocative set by Michael Heil as if for the first time. You're swept away by his words to St. Louis 1932, and the boy who would have done anything to escape it — not realizing until too late that true escape is impossible. And what is Williams' oeuvre if not proof of that? All of his compelling female characters owe something to the women he left behind in St. Louis and, in particular, the sister as odd and as impossible as blue roses.

Today the hated apartment on Enright has been torn down, but a bust of Williams commemorates his history in the Central West End. A few blocks away, you can rent his family's old apartment on AirBnB — now fully remodeled, and apparently far from dim — for a premium. This festival is a far better way to honor his memory.