The indoor studio exhibition is a first for artist Katharina Grosse, who's known for her large-scale, on-site works 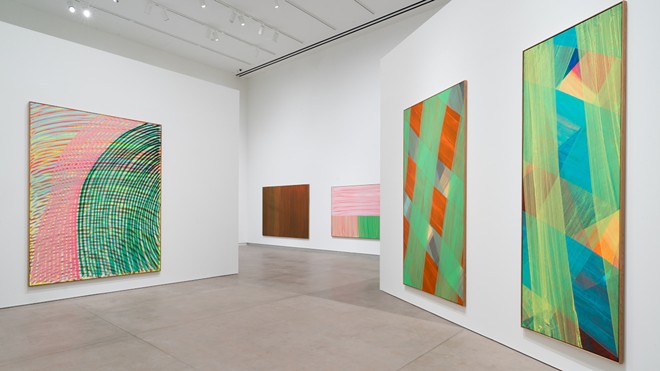 Virginia Harold
The evidence of Katharina Grosse’s process shines through in the exhibition, as in Untitled, 2004, pictured second from the right.

Walking through Katharina Grosse’s latest exhibition is like stumbling into a contemporary wonderland. Mystifying patterns, unlikely materials, and bold colors that should clash — but don’t — greet you at every turn. This is all par for the course for Grosse, an artist renowned for a vivid color palette and affinity for strange mediums.

The biggest difference between this show and her previous ones? This one’s indoors.

Aside from the two galleries, Grosse’s work at the Kemper also includes a series of three digital prints on fabric, roughly 22 1/2 feet tall, hanging in the museum’s atrium. The unveiling of Studio Paintings is accompanied by a book of the same name featuring 160 full-color plates and 38 supplemental images documenting her studio practice over the last three decades.

Gross flew in for the exhibition’s opening on September 23. Wearing a bright, orange dress with a white, geometric pattern, Gross appeared as vibrant and spirited as the paintings that surrounded her.

“You're very active in the space,” she said as she introduced the exhibition. “Your position [within the exhibition] defines what you can get and what you can understand of the work. You constantly move, you see things out of the corner of your eye. … I think it is odd to have a very clear relationship to the work.” 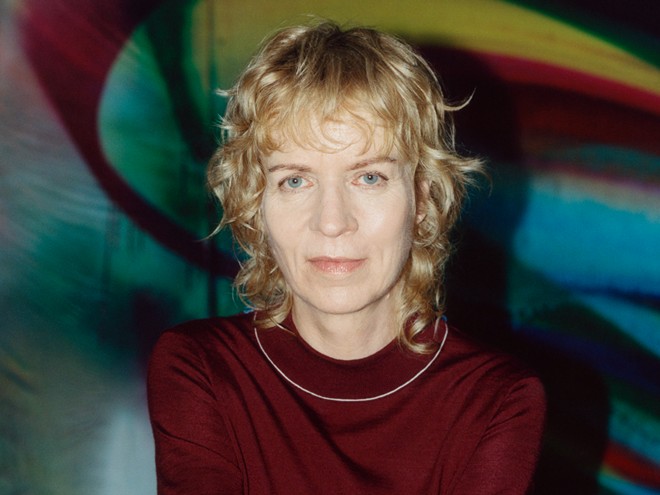 Larissa Hofmann
Katharina Grosse's exhibition at the Kemper will be on display until January 23, 2023.

The indoor studio exhibition is the first of its kind for Grosse, who is most known for her large-scale, on-site works painted directly onto their surrounding environments.

“Katharina Grosse is one of the most stimulating, creative and thoughtful painters working today,” said Sabine Eckmann, the William T. Kemper director and chief curator at the Kemper Art Museum, in a statement. “Yet, to date, her works on canvas have been relatively understudied. We are extremely honored to shine a light on this foundational aspect of her oeuvre.”

All of the works in the exhibition are untitled. Instead, each painting is labeled with the year Grosse painted it, amplifying the exhibition’s goal of exploring changes and continuities in Grosse’s work over the years.

The exhibition's first section, Returns, Revisions, and Inventions, features many of her earlier works. It also highlights the fluid and spontaneous nature of Grosse’s creative process. She doesn’t begin her works with a specific endgame in mind. Rather than plan out her paintings from the start, she lets the creative process guide her as she works.

“That is very much how I worked and still work,” Grosse says. “I define the starting point, but then it is very possible that toward the end of the work, I'm very far away from where it started. I find that it's important to actually sift through the possibilities.”

The evidence of Grosse’s process shines through in the exhibition. Viewers can trace each brushstroke or color from the painting’s genesis, even if the completed work sees them covered or hidden. In Untitled, 2005, for example, a blue, magenta and yellow geometric pattern is clearly visible beneath lime green streaks that define the foreground. 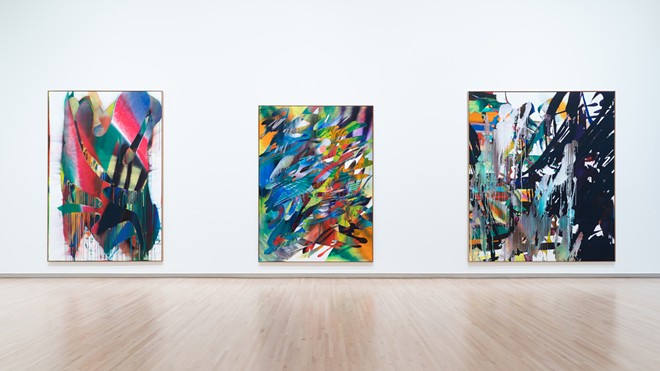 The second section, Fissures and Ruptures, marks a slight departure from her earlier methods. Through the use of unusual methods and mediums, Grosse demonstrates her desire to blur the lines between the canvas and its surroundings. She particularly favors using a spray gun, which allows her to expand her range of motion and, consequently, the kinds of works she is able to create.

Grosse also employs soil, shredded canvases and even tree branches to blur the line between the traditional canvas and the outside world. For one work, Untitled, 2006, Grosse stomped all over a circular canvas wearing specially made, rubber-plated boots. Muted brown footprints litter the splashes of red, orange and green that form the background, drawing attention to the process that brought the work into being rather than the finished product itself.

The exhibition allows viewers to see how Grosse’s work has evolved over the years, but it also highlights captivating consistencies. Color is decidedly one of them.

“I had a moment, definitely, when I left art school, and it was really understanding and agreeing with myself that color is the main medium,” Grosse says. “It's like when you switch on the music of a song that you totally love, and the first two bars you hear you go, ‘Ah, alright.’ … That's why I live, and that's what color does for me, really.” 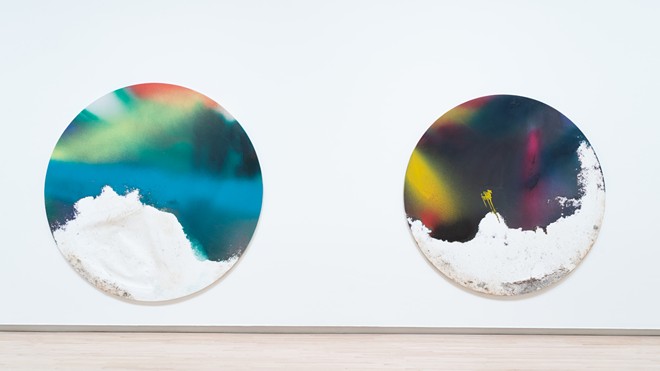 Though Grosse generally skips the canvas for her site-related works and paints directly on the surrounding environment, even her studio work demonstrates her proclivity for larger-than-life art.

Grosse’s massive canvases have the effect of making viewers feel almost childishly small, yet drawn into something larger than themselves. Grosse is interested in the way paintings allow us to tap into and process our emotions. The canvas, though in some ways confining, also proves a particularly powerful medium for achieving this effect.

“You can be actually more aggressive because a lot of action goes into a small space, whereas outdoors, the action I have goes into a large space, so it's actually slow motion,” Grosse says.

The Kemper Art Museum is open to visitors from 11 a.m. to 5 p.m. Mondays and Wednesdays through Sundays. You can check out Studio Paintings, 1988-2022: Returns, Revisions, Inventions now through January 23, 2023.