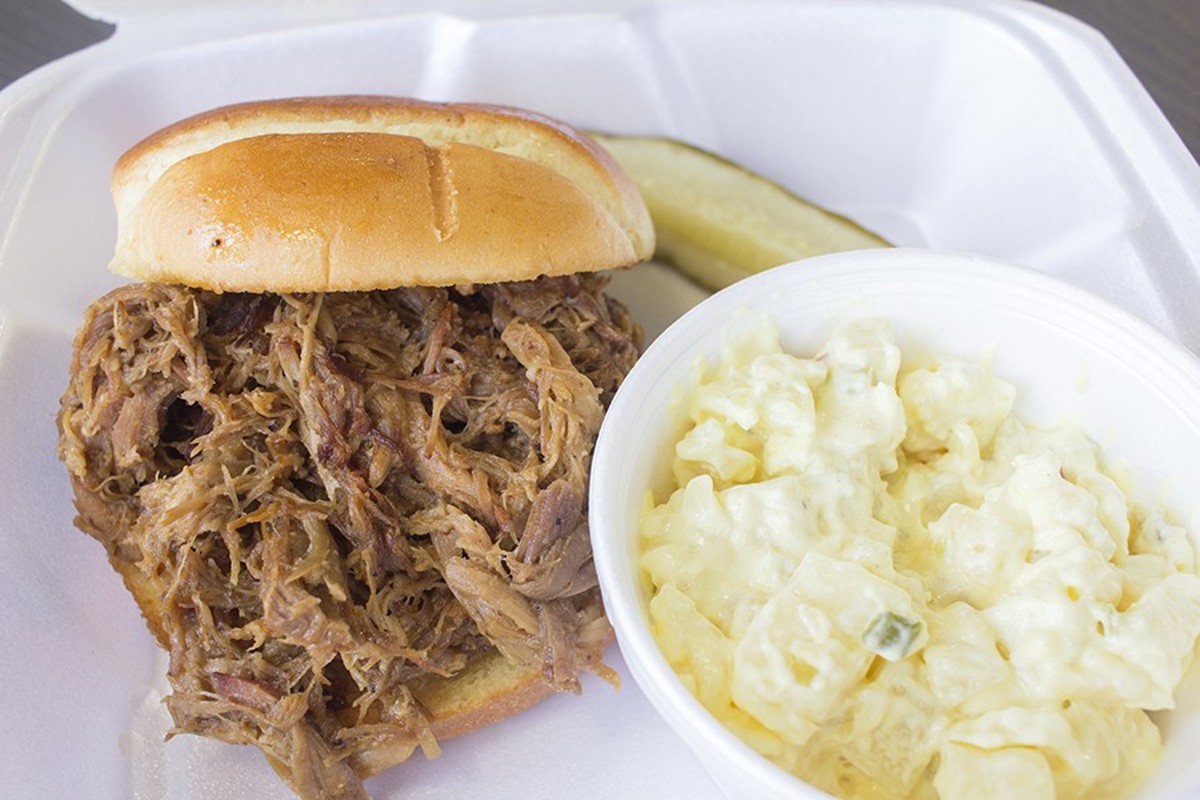 In 2009, the heartless monsters at Sara Lee cut out a tube-shaped hole in the heart of hot dog lovers everywhere when they shuttered Best Kosher, the Chicago-based producer that made what was inarguably the best frankfurter on the planet.

You remember Best Kosher: the red and yellow standalone carts that used to send smoke signals throughout Busch Stadium, a siren song to those whose discerning palates craved a gourmet, caramelized onion and sauerkraut-covered alternative to the traditional stadium dog. It wasn't uncommon to miss multiple innings waiting in line for one of these plump, garlicky wonders, but it didn't matter. The taste was worth the sacrifice.

And then they were gone, the victim of Sara Lee's inexplicable decision to do away with perfection in favor of propping up mediocre brands. For seven years, I've been searching for an adequate substitute (not, as a brand manager suggested in response to one of my angry letters, Ball Park). The quest has led me to multiple stadiums, hot dog carts around the country and, three weeks ago, a gas station at the corner of Woods Mill and Clayton Road — one that would not only restore my faith in hot dogs but would introduce me to 3 Bay BBQ and quite possibly the best pulled pork in town.

Out of tragedy comes beauty. 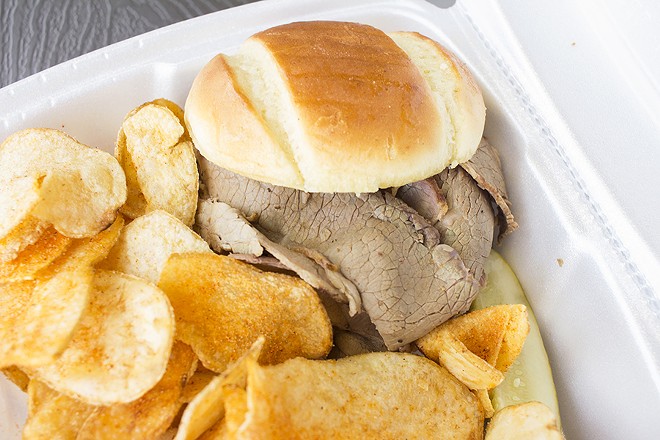 3 Bay BBQ co-owner Carol Grosz understood my pain. In fact, her commiseration is how I discovered that she and her husband Rick not only cook the city's best hot dogs, but also serve outstanding barbecue out of their Town & Country Phillips 66 station. Yes, really.

Our meeting was a complete accident. I needed gas and went inside to see if their roller dog selection included Eisenberg, a brand I discovered a few years ago as a worthy heir to the Best Kosher throne. As my husband had found out a few months prior, a handful of Phillips 66 stations around town are now carrying Eisenberg. We never pass up the opportunity to indulge.

A woman was stocking the condiment bar, and I began chatting her up, asking who handles their food service with an eye to buying a case to take home. As we talked about how much we love Eisenbergs, she saw me reach for one and stopped me. "You can get these," she said. "But the big ones are in the restaurant." 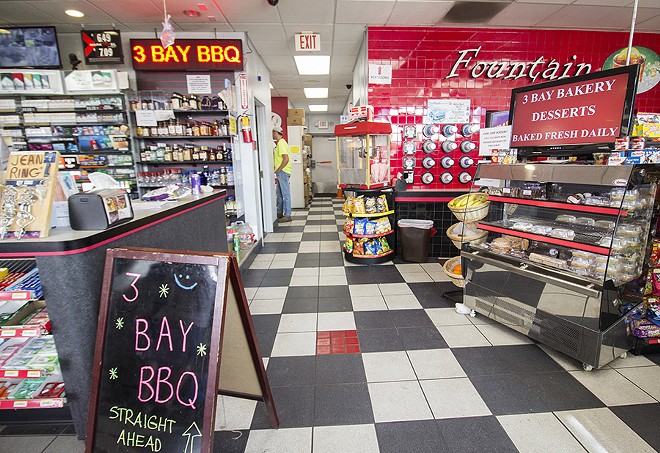 MABEL SUEN
It's easy to miss 3 Bay's offerings, though a sign points the way to the order counter.

That woman, who later introduced herself as Carol Grosz, motioned toward a hallway that looked like it contained nothing more than a couple of bathrooms. Upon closer look, though, I noticed a group of people huddled around the corner. As I walked back, the distinct smell of a smoker filled the air, with a line forming in front of a counter that bore no difference from where you drop off your keys for an oil change.

Well, there was one difference: Instead of a list of services and tire prices, the wall contained a menu listing everything you'd expect from a bona fide smokehouse: ribs, brisket, pork steak and a claim to the "best pulled pork this side of the Mississippi."

Grosz noticed my confusion and gave the explanation she surely repeats about 50 times a day. She and Rick have owned the Phillips 66 station for over three decades and started doing barbecue about four years ago. At first, they smoked the meat out of a little trailer in the parking lot. 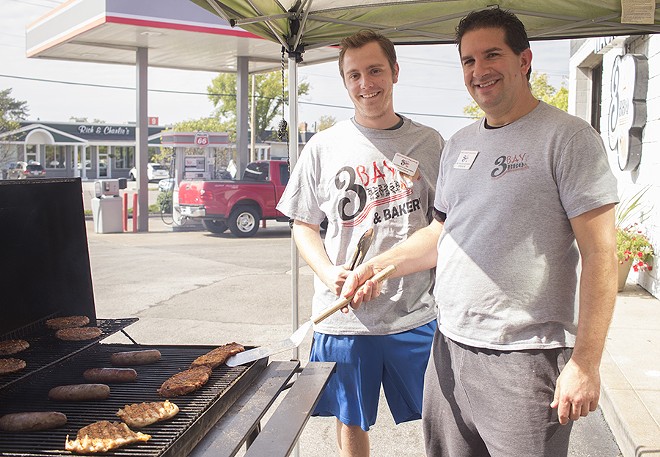 But the side project proved an overwhelming success, even as, in 2015, Phillips 66 issued new regulations decreeing that its gas stations could no longer have repair facilities. Unsure what to do with their three-car service bays, the Groszes decided to expand their barbecue business and convert the auto repair shop into the restaurant. 3 Bay BBQ was born.

Though the Groszes also cater to takeout traffic, the full experience of 3 Bay BBQ is best enjoyed sitting in the old service area. The space retains the bare-bones industrial feel of an auto garage, though in place of car lifts you'll find white wooden picnic tables and a cafeteria-style counter where cooks make your order. Large fans circulate air in the completely white room, and when weather permits, the old garage doors open to the outside.

Carol Grosz is a gracious host, but stone-faced serious about her hot dogs. As she explained, she and her husband started carrying the Eisenberg brand a while back and loved them so much, they decided to offer a jumbo version at 3 Bay BBQ. And "jumbo" is an apt description, as this massive frank is about ten inches long and the circumference of a half dollar. The snappy casing is scored in three spots, making the dog almost spiral out and providing extra surface area for caramelization. The taste is pure beef, spiked with smoky paprika and garlic. There are no bells and whistles — no cheese sauce or bacon or other nonsense. Just dog, bun and a choice of DIY condiments. Somewhere, Mr. Best is smiling. 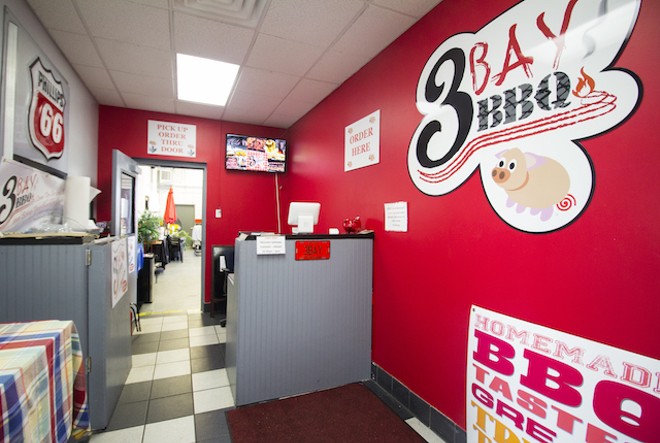 MABEL SUEN
Guests order at the counter and can enjoy their food in the connected garage.

The hot dog may have been what enticed me, but there is much more to 3 Bay BBQ. The pork steak is an outstanding example of the St. Louis classic, though instead of being covered in Maull's, it's served undressed. This allows the sweet pork flavor of the meat, dusted with nothing more than salt, pepper and the kiss of woodsmoke, to shine through unadulterated. It's so fall-apart tender you won't need to worry that the only available knives are plastic.

3 Bay's pulled chicken is also shockingly delicious. The meat, pulled into large hunks and served un-sauced, is succulent with natural juices and a simple brine. Ribs have the appropriate chew and pull you'd expect from any legitimate smokehouse and are enlivened with a dry rub that tastes of cinnamon and five-spice. If you prefer a saucy style, you can get the "sticky" ribs, which are coated with a molasses-heavy barbecue sauce that forms a sweet and smoky glaze over the meat. Both are delightful.

MABEL SUEN
You can get your mac and cheese topped with pulled pork.

As a Texas-style brisket fan, I found 3 Bay's version to be adequate. There was a pleasant beefy smoke flavor, and the meat was tender and juicy, but stylistically, I prefer the bark-coated fat bombs you can get at other spots.

The pulled pork, however, is 3 Bay's calling card — its claim of being the best is not hyperbole. When you first see it, you think it's sauced, but then you realize that the liquid-y texture is rendered fat, pork jus and a sweet-forward spice rub that form a mouthwatering nectar. The texture is akin to the most succulent carnitas of your life, an effect that seems almost impossible to achieve outside of braising. You can order it as a sandwich, and allow the juices to sop into the bun, or as a platter. If you opt for the latter, I'd suggest grabbing a spoon. 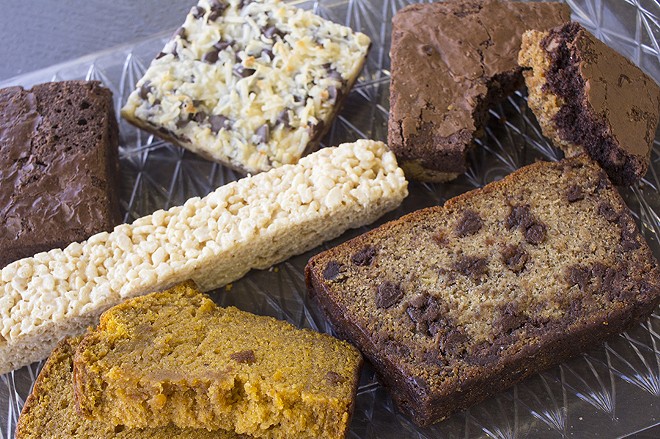 It's hard to imagine you could save room for dessert at a place so decadent, but barbecue is only part of the 3 Bay story. The restaurant is also a bakery where Carol Grosz shows off her prowess with sweets, including a pecan-studded pineapple coconut cake, a variety of sweet breads and muffins and what should be considered a contender for the city's top gooey butter cake. Plain, chocolate, pumpkin and even a brownie/gooey butter hybrid are sweet, of course, but avoid the pitfall of being sickeningly so.

The joy of discovering a place like 3 Bay BBQ — a delicious no-frills outpost in the most unlikely part of the St. Louis suburbs — is almost as good as the food. Almost. But then you bite into one of the pulled pork sandwiches, or better yet, that magnificent hot dog, and you realize that the real joy is in the taste. It may not be the "Best," but it's as good as it gets.