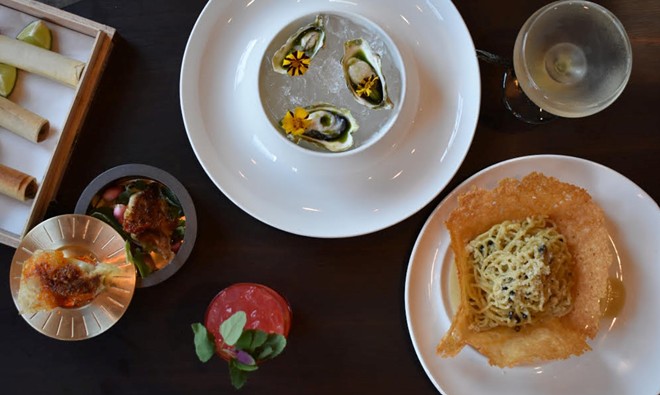 At first glance, you might think the two dumplings, with their jutting lacy wings of rice flour, are not food but art. One is set within what appears to be a small, round box and the other rests on its gold lid, which is slid ajar so both offerings are visible.

Take a bite, and those architectural elements crumble with a snap, giving way to a delightfully thin and tender dumpling skin and a rich filling that’s cut with heat from a drizzle of Calabrian chili sauce.

Tony and his wife, Jessica, are set to debut that dumpling — along with a host of other dim sum, sustainable seafood and more — at their restaurant snō (3611 Juanita Street, 314-386-4274) on August 19. Set in the former home of VP Square in Tower Grove Heights, the chef-driven restaurant will serve modern fare that combines Tony’s formidable background in European techniques with Asian cooking. 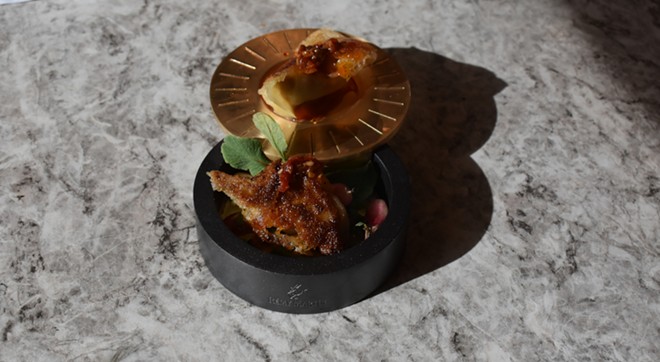 Jessica Rogen
The dumplings at snō look like works of art.

Tony named snō for his mother, Tuyet, whose name means snow in Vietnamese. The importance of family to the Nguyens can be seen throughout the restaurant in everything from menu to décor to location.

The couple, in fact, relocated to St. Louis from California to open the restaurant near Tony’s parents.

“It's been very family hands on,” Jessica says, noting how her father-in-law painted the entire building. “That's why we moved here.”

Snō is located a block away from South Grand Boulevard in a two-story storefront; the first floor has two dining rooms, small, 44-seat dining one where Nguyen plans to host private events and a tasting menu, and a 10-seat bar where guests will be able to look into the kitchen and order dim sum. The upstairs holds the main dining room, which has space for 80 guests. 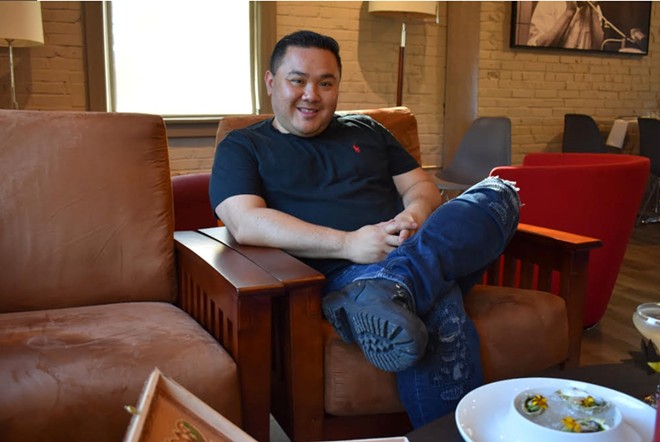 There are family touches in all three spaces: an artistic rendering of a cherry tree, his mother’s favorite; pictures of and quotes from chefs Anthony Bourdain and Marco Pierre White; a bookshelf full of cookbooks; pictures of the Nguyens in culinary school and photos of celebrities from Tony’s days cooking in Beverly Hills.

“We basically wanted to make it look like our home and comfortable and like something we would want to sit in,” Jessica says, adding that her favorite section holds the bookcase. “There's so many stories within these books, and we've made so many recipes from these books and all of our inspirations are up there.”

Tony took inspiration from more than books for snō’s menu; everything on it will have a modern Asian twist, though that may be very subtle. Some examples of this ethos are a cacio e pepe made with ramen noodles and his signature tuna cigars, which he presents smoking in a literal cigar box.

Jessica Rogen
The tuna cigars are presented smoking in an actual cigar box.

It’s the only item that’s made the journey to snō from Crustacean, where Tony served as executive chef for eight years. Though the tuna cigars, alongside some other stalwarts, will stay on the menu, the couple plans to rotate dishes throughout the year to stay fresh and to take advantage of what’s in season. In addition, Jessica, who is a marine biologist as well as a chef, will oversee a sustainable seafood program in addition to serving as general manager. 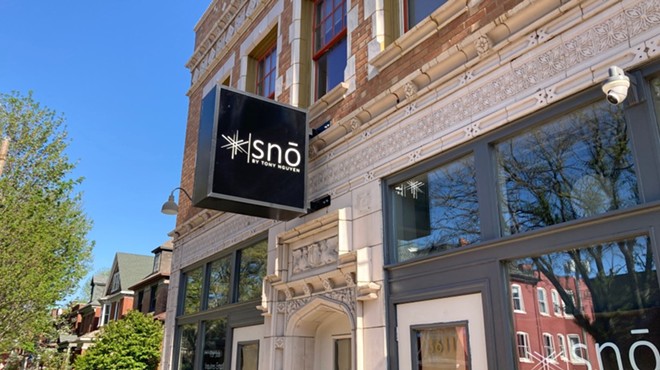 
“We’re starting with a very humble, modest menu, and we’ll move forward to pushing ourselves a little harder,” Tony says.

That menu will be paired with a drinks program put together by Justin Gobelman, the bar chef. He’s made sure to incorporate Asian ingredients and flavors to complement the food. Some examples include a watermelon cocktail, which uses pink peppercorn bitters and rice wine, and a dirty martini that contains a sake-based vermouth, seaweed gin and a garnish made from roasted nori. 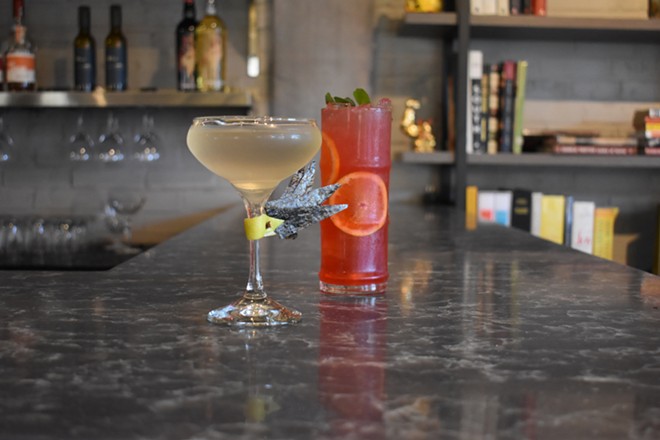 Jessica Rogen
Everything at snō has some element of Asian flavors or techniques, even the drinks.

Though upscale fare often breaks the bank, Nguyen plans for snō to stay affordable. Dishes begin at $9 and mostly stay under $40.

The idea is to be a space for everyone and one that fits into St. Louis.

“We just want to do well and make sure everybody's proud,” he says, noting that they’re using local ingredients, visiting farmers markets and tagging St. Louis producers on snō’s social media platforms. “There’s such great restaurants in this area, and we just want to be part of it.”

Snō opens on August 19 but is accepting reservations now.