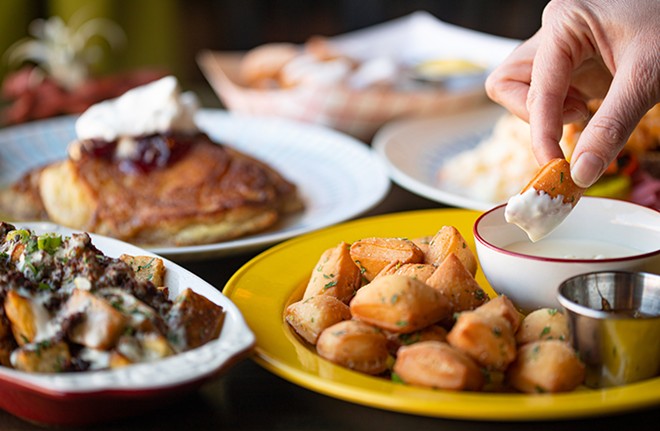 We need to talk about Tony Collida's pancakes. Less run-of-the-mill hotcake than a marriage of a pancake and flan, these fluffy wonders actually jiggle when the plate hits the table. Cooked in a generous amount of oil, the outside of the cake is crisp, golden and nutty; when pierced with a fork, this crunchy exterior yields to a custard-like fluff you don't know if you'd rather eat or nuzzle up against on a cold, wintry day. As the peak of snowy white whipped cream that caps the pancakes begins to melt into the fresh blackberry jam, there is no choice but to dig in and surrender to such a morning masterpiece.

Collida swears that his pancake recipe is taken verbatim from The Joy of Cooking, but one has to wonder if he gained his impressive skills from a deal at the crossroads rather than a classic cookbook. Regardless, when you talk to Collida, you are instantly struck that he is genuinely, in his soul, that good. Having spent years cooking, Collida has worked his way through the process many great chefs cycle through: the initial spark that leads to a determination to soak up every bit of knowledge available, a desire to apply that knowledge in ambitious ways, then, ultimately, a realization that the most meaningful way to cook is one that goes back to the basics. Pancakes, fried chicken, grits — these days, Collida shows his prowess by giving the people he cooks for the best versions of the dishes that nourish your soul when you eat them.

In some ways, Collida has experienced every stage of that cycle over the past six months at Grand Pied (3137 Morganford Road), the restaurant he owns with his partner in life and business, Jaimee Stang. Originally conceived of as half of a bar-restaurant combination, Grand Pied was Collida's first foray into restaurant ownership after a long career in the industry, and he dove into the project with great enthusiasm. The arrangement seemed straightforward enough: Former Tick Tock Tavern owner Thomas Crone would run the bar side of the operation, dubbed Chatawa, and Collida would have full control of Grand Pied, the space's food component. The two entities would be separate, but would coordinate with one another, similar to the way you might find an independently operated food counter inside a brewery.

Mabel Suen
Grand Pied's pancakes are the best version of the dish you will find in the St. Louis region.

Crone's vision for Chatawa centered on the St. Louis-New Orleans connection and the small towns along Interstate 55 that link the two cities. Collida took the idea, ran with it and even found a reference to a Bigfoot sighting in the city of Chatawa, Mississippi, that inspired his food concept's name (Grand Pied translates to "big foot" in French). He also had ambitious plans for the menu that included a collection of Midwestern and NOLA-inflected small plates like deconstructed charcuterie boards, pâtés and beignets, as well as weekend brunch service.

For ten weeks, Collida operated Grand Pied according to that plan, and it seemed to be going well. That's why it caught everyone involved — diners, bargoers, anyone who follows restaurant comings and goings, and even Collida himself — off guard when Crone decided to shutter Chatawa, citing issues with product sourcing and not having enough sales volume to get the bar up and running as reasons for its closure. Crone's decision surprised Collida and called into question what, exactly, he was doing with Grand Pied. As he pondered his restaurant's future, he continued on, business as usual (minus a liquor license; currently, the restaurant is BYOB), while struggling to figure out what he wanted to become of it and musing with Stang, who had come on board to help out, whether or not they should even continue on.

After a flu outbreak in their family forced Collida and Stang to temporarily close Grand Pied around the holidays, they wondered if this was maybe their time to call it quits. However, they could not shake the feeling that it wasn't time to do so — they just needed to figure out a way to do things on their own terms. On January 1, they took action, changing the hours, redoing the menu and focusing on being the sort of restaurant they finally felt free to be. With just Collida in the back of the house, Stang running the front, and their two teenage daughters pitching in when they can, they relaunched by focusing on what they do best: brunch and home-cooking staples — the classic dishes you'd get if you joined them around their dinner table.

Collida and Stang say that the reset has made Grand Pied feel more honest and, as a result, has allowed it to naturally become the restaurant it was always meant to be. You can taste that earnestness in every last dish that comes courtesy of Collida's skilled hands, not just those show-stopping pancakes. Ham and eggs, for instance, are positively transcendent. Collida starts out by cooking slices of Missouri-raised Patchwork Family Farms ham steak in a skillet. He uses the pan drippings, full of meaty pork bits, to make a coffee-based red-eye gravy that he then drizzles over the ham, roasted breakfast potatoes and an egg (over-easy if you want the optimal experience). There is a subtle brown-sugary undertone that softens the deeply savory flavors of the meat and potatoes that gives the dish a comforting complexity.

Grand Pied's slinger is an almost incomprehensible balance of restraint and indulgence. Like the traditional St. Louis diner staple, Collida's version is hearty, with roasted potatoes, rich ground-beef chili, cheese and an over-easy egg. It's decadent without feeling greasy. The chili is meaty, yes, but also filled with beans and the right amount of liquid so that it's the ideal thickness. It's generously spiced, then garnished with piquant onions and fresh herbs; there is enough balance of bright flavor to cut through the richness.

Collida's talent extends beyond brunch. Beignets, a nod to his past gig at the now-shuttered NOLA-style coffee shop Cafe Ventana, are soft, golden pillows that are outstanding when dressed in a traditionally sweet fashion, but utterly transcendent when presented savory style alongside a luxuriously silken Prairie Breeze cheddar cheese sauce. Collida uses sodium citrate to turn the hard cheese into a sauce that's the texture of molten Velveeta, another magic trick as impressive as what he does to his pancakes.

A hauntingly spiced gumbo, laden with crawfish and hunks of andouille, shows off Collida's soup prowess. Served over grits so velvety you wonder if they're made from cornmeal or heavy whipping cream, the dish is like a Cajun version of mashed potatoes and gravy. 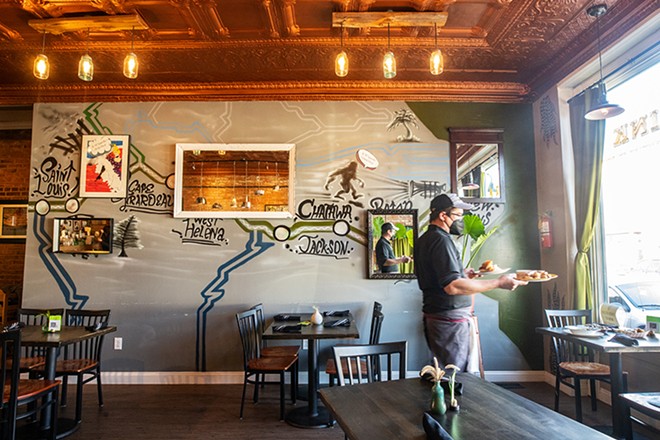 Mabel Suen
Grand Pied is finally the restaurant it was always meant to be.

Those New Orleans flavors also show up on Grand Pied's dirty fries, a mound of flawlessly seasoned potatoes covered in debris gravy, which is basically what happens when you take an assortment of meats, cook them in a searing hot skillet, then make a thick, almost sloppy-Joe-like condiment from the drippings. If that wasn't enough, Collida gilds the potato lily with that Prairie Breeze cheese sauce for a version of cheese fries that every cheese fry ever in existence wishes it could be. If you're there on a Wednesday, you can pair the fries with a dirty burger, which consists of two smashed patties, the glorious cheese sauce and debris gravy. If you weren't already blacked out from such majesty, Collida's steak fries — the result of a four-step process that unquestionably produces the best fries in town (RIP, Frankly Sausages) — will put you over the edge. The idea of choosing between this magnificent dish and his battered chicken thighs, glazed with fermented chili honey and served over toasted Union Loafers bread, is too much to bear. Go with a friend.

Collida and Stang are clear that Grand Pied has not gone the way they thought it would, but because of that, it's turned into exactly the restaurant they want it to be. It's been terrifying and thrilling, uncertain and freeing, which makes the success they are on the cusp of experiencing all the more meaningful — and brings a vital addition to our city's food scene.