For 15 years, Mary and Zach Rice have dreamed of opening a restaurant together. It was the spark that animated their relationship, informed their careers in the hospitality industry and helped them cultivate a vision of what they wanted their lives as wife and husband to be.

That spark is also what ultimately led the Rices to buy the Tower Grove South spot Three Monkeys from its original owner in 2018. The decision was a no-brainer; Zach had worked at the beloved neighborhood gathering place since it opened in 2007 and had risen to the position of general manager before leaving the restaurant in 2015. When the owner was looking to sell, Zach instantly came to mind. He and Mary excitedly signed the paperwork, took the keys and began welcoming in guests to what was officially their place without skipping a beat.

The arrangement was an easy one, but something felt like it was missing. Though the Rices were happy to have a way to dip their toes into ownership without the risk of starting a concept from scratch, they could not help but feel that were still running someone else's restaurant. They loved Three Monkeys dearly and felt a responsibility to be stewards of its legacy, but they realized that if they were going to truly do what they had always wanted to do, they would have to make a change.

Mabel Suen
Mary and Zach Rice are the owners of Black Sheep.

The pandemic — for all of its dreadfulness — gave them the opportunity to do that. Like all restaurants, the crisis forced the Rices to rethink their business model and put more of a focus on to-go food. It helped them hang on for a short time, but as they looked at their books, they realized that the restaurant could not sustain itself on carryout orders alone without alcohol sales. They thought that if they needed to fundamentally transform the business, they might as well turn it into the restaurant they'd always wanted to run. So in August of 2020, the Rices shut down Three Monkeys with the goal of bringing to life the restaurant they'd always wanted.

That spot, Black Sheep Whiskey & Wine (3153 Morganford Road, 314-772-9800), opened last November as the realization of the Rices' goal to bring a multi-faceted dining option to the neighborhood. As Tower Grove South residents themselves, the pair had often lamented the lack of a good date night option along the Morganford Road commercial strip, and they see Black Sheep as filling this void without being pigeonholed into a weekend dinner spot. To that end, they have kept the place sophisticated but casual, dimly lit but family-friendly and have even launched a brunch concept, Mama 2's Biscuits out of the restaurant three days a week (Mama 2's is not included in this review). It may sound like a lot on its face, but in the Rice's capable hands, it hits just the right note.

Zach, who focuses on the back of the house, hesitates to describe Black Sheep as being of any particular genre but says he comes up with his dishes based on the food he and Mary like to eat. That means small plates for grazing, such as Brussels sprouts fried to a gorgeous crisp that edges toward charred without ever going over it. The sprouts are topped with shaved parmesan cheese and sriracha aioli, which gives the dish enough heat to be interesting without taking it too far.

Bloody Mary deviled eggs are another successful sharable offering. The flavoring is no gimmick; the creamy yolk mixture tastes exactly like the classic brunch cocktail with notes of celery salt, Worcestershire and Tabasco. Each egg is garnished with a sliver of a bread-and-butter pickle, which adds brightness; the sweet, vinegary flavor goes so well with the mix you wonder why it's not the cocktails' standard accoutrements.

Typically, I much prefer raw to baked oysters, but Black Sheep's version may have converted me. Served on the half shell and topped with arugula, butter, parmesan and breadcrumbs, the oysters were barely kissed by the oven's heat, allowing them to retain the tender texture of their uncooked form.

Pizza was a significant part of Three Monkey's identity, and the Rices did not want to take that away from the neighborhood. Sometime this year, they plan on opening a dedicated pizza spot across the street called Three Little Monkeys, but in the meantime, they have dedicated a significant part of Black Sheep's menu to a variety of pies. These include a riff on the Margherita, which pairs gooey cheese, tomatoes and fresh basil with the restaurant's signature flaky crust. Not traditional Neapolitan by a long shot, it's a satisfying, deck-oven take on the classic. The Rices also offer a few more creative pie options, like the chicken Alfredo pizza, which uses a creamy white sauce for the base and smoked gouda, grilled chicken and mushrooms for the toppings. Our brilliant server's pro tip to add bacon turned the dish from good to great, thanks to the interplay of smoke between the meat and the gouda. 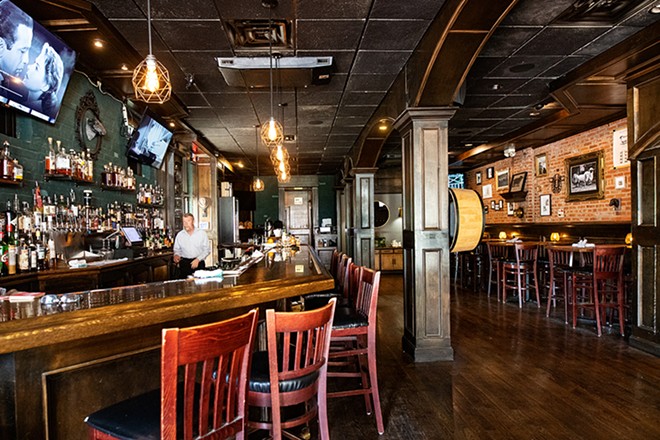 Mabel Suen
The bar and dining room at Black Sheep.

Black Sheep's classic smash burger is exactly what you want at your local watering hole. Served on a pillow-soft bun and topped with cheddar cheese, the meat is thick enough to be juicy but thin enough to get a slightly crispy edge. Zach shows he is also capable with more formal entrees like a trout special. Here, the well-cooked fish is lightly seasoned, pan seared and topped with a delightful tomato-and-olive relish that gives the dish a bright, briny element. He's also adept at comfort food; the restaurant's signature item, the biscuit pot pie, is an ode to the woman who taught him to cook — the quintessential grandma who schooled him on Southern food when he was a kid in his native Tennessee. Here, Zach takes a rich mixture of roasted chicken, carrots, onions, potatoes and peas and tops it with a massive bacon-fat biscuit. Unfortunately, he does not serve it with a cot, which is what you will need if you finish this decadent concoction.

The Rices feel grateful to Three Monkeys for allowing them the opportunity to create the restaurant they'd always envisioned. They admit that there have been times it hasn't been easy. Taking over such a beloved spot has a special set of challenges, and they know there are times when their guests walk through the doors expecting things to be as they'd remember them. However, they are quick to note that those sentiments are always short-lived — once you experience what the Rices have created, you taste how refreshing change can be.