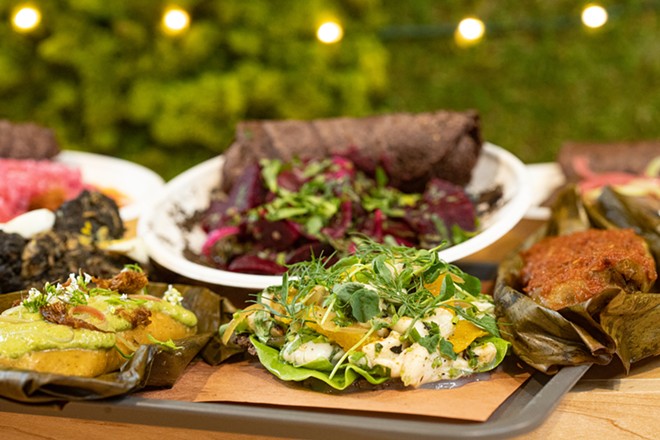 As a young cook working under the late chef Robert Uyemura at Yia Yia's Euro Bistro many years ago, Alex Henry dreamed of owning his own fine-dining restaurant. Like many up-and-comers, he envisioned a quintessential modern eatery based on the food and techniques he'd picked up working for chefs in conventional upscale kitchens. But Uyemura saw something different for Henry. Dazzled by the traditional Yucatán-style staff meals Henry cooked, Uyemura encouraged the chef-to-be to look inside himself and embrace the food that was personally his.


Now, roughly a decade later and with stints at many fine-dining properties under his belt, Henry has finally heeded Uyemura's advice with his debut restaurant, Sureste Mexican (1 Foundry Way). Based on the Yucatán cuisine that is the centerpiece of his family's culinary tradition, the fast-casual spot is both a love song to the food that defines his ancestral homeland and an opportunity to share this less familiar style of regional Mexican cuisine with St. Louis diners.

In hindsight, Sureste has always been Henry's culinary destiny. After moving to St. Louis from Mexico's Yucatán region when he was a kid, Henry describes a childhood based around a dual identity. While one side was defined by his new home in the United States and all of the American traditions that entailed, the other part of him remained firmly rooted in Mexico, particularly in his abuelita's kitchen, where he would spend several months every year with his family. She was extremely influential, instilling in him a passion for food, so when it came time for him to pursue a career, he chose cooking and enrolled in the culinary program at St. Louis Community College–Forest Park. Around that time, he began working for Uyemura and then moved on to other kitchens around town before landing with Michael and Tara Gallina at the acclaimed Vicia and eventually Ben Poremba's upscale Mexican spot, Nixta. 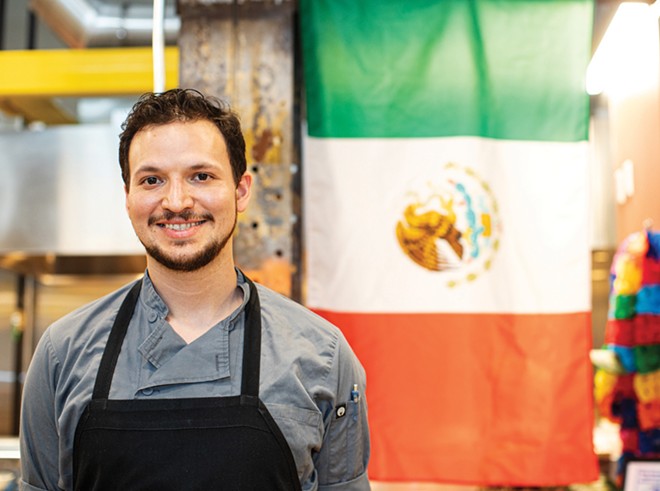 Mabel Suen
Alex Henry is proud to show off his culinary heritage.

Henry's time at Nixta was revelatory because it got him thinking about all that was possible with a higher-end Mexican concept. However, it would take him a couple of years, as well as a two-year gig as Cleveland Heath's executive chef, to take the leap and open Sureste. Though he initially envisioned the restaurant as a sit-down-style brick and mortar, he decided instead to test the waters as a stall inside the Food Hall at City Foundry.

Since opening in October, Henry has been thrilled by the response he's received to his less familiar style of Mexican cuisine. The success of Sureste has proven something he has believed all along: that once people were given the chance to experience traditional Yucatán food, they would embrace it full force.

This success has everything to do with Henry's undeniable talent and fierce commitment to doing things the long way — exactly how his abuelita would do them. You see this ethos in every dish he prepares, even something as deceptively simple as chips and salsa. For this humble side dish, Henry chars onion and pepper scraps, then mixes them with tomatoes, chiles and spices for a concoction that is more earth than heat. Another dip, sikil pak, is a traditional Yucatán appetizer made from toasted pepitas and tomatoes — and looks like a chunky hummus but tastes of toasty cilantro-and-onion-flavored nuts. 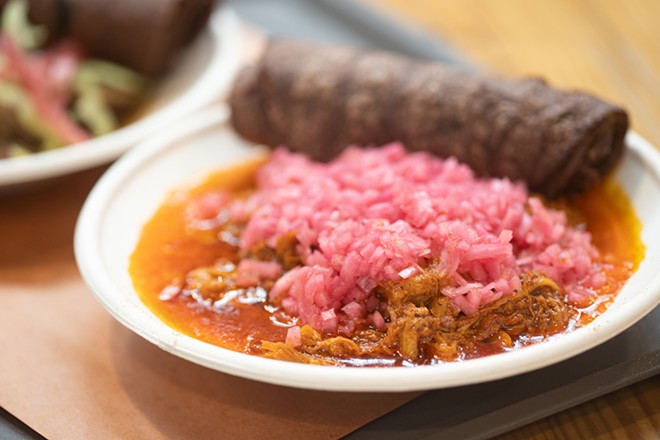 Mabel Suen
Sureste's cochinilla pibil is one of its most thrilling dishes.

Unlike a street taco, Sureste's tacos are served deconstructed; diners are given a bowl brimming with a generous portion of filling and three handmade blue corn tortillas rolled and placed on top of the dish. You will not go wrong, whatever your choice, as Henry is masterful in cooking everything from golden potatoes — tossed in a cumin-black-pepper-allspice seasoning blend and garnished with pickled red onions — to stunning citrus-marinated beets.

However, it's not only vegetarian options that impress. Henry's interpretation of the fish taco is extraordinary and nothing like the California-style fried versions. Here, Henry mixes meat from a whole roasted fish with tomatoes, citrus, chiles and herbs; the fish is so juicy, it forms its own vibrant sauce that you soak up with the tortilla, similar to soaking up a cioppino's broth with crusty bread.

Diners can also choose two different types of turkey. He prepares the traditional Yucatán protein either in a bright citrus marinade or in a burnt-chile mole. The latter he describes as a labor of love that, from start to finish, takes four or five days. You taste that effort in the deeply earthy, complex chili warmth of the meat. 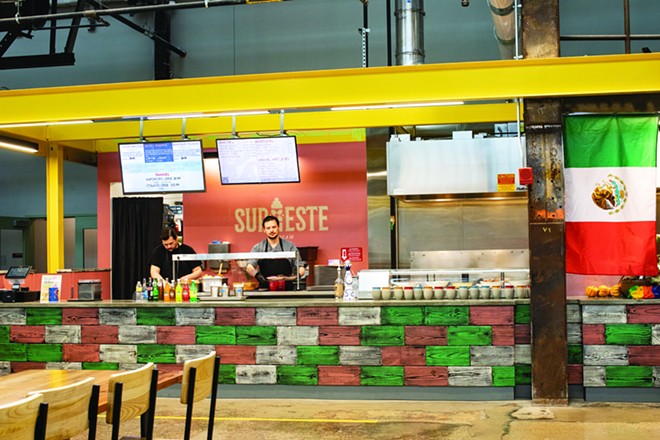 Mabel Suen
Sureste is an exciting addition to the Food Hall at City Foundry.

Two pork offerings round out Sureste's taco fillings. The first, a crispy pork version, combines tender belly with hunks of crunchy chicharrons that is finished with aioli and cabbage. It's an outrageously delicious choice and masterful mix of textures, though the second pork option, the cochinita pibil, may be the best thing you put in your mouth all year. For this, Henry uses a whole hog slow cooked with housemade spice paste and fresh citrus. The meat is so luscious; it's spreadable and glistens with a glorious nectar of fat and citrus juice that is both decadent and bright. You have never had cochinita pibil until you have had Henry's.

Tacos are not the only way to enjoy these excellent fillings. Sureste offers a pibihua, or Mayan Fried Roll, a hollowed-out boat of thick masa, as well as a panucho, or Bean Filled Tostada. The former, soft and tender, allows the protein of choice to soak into every crevice like an open-face sandwich. The latter is crisp and filled with Sureste's outstanding bean concoction.

However, if there is one dish you must try at this magnificent restaurant, it's the colado-style tamale. Forget your tamale preconceptions. This style is wetter, plumper and fattier — and presents less like corn than a silky custard that jiggles when you move the plate. Alone, this voluptuous masa would be a worthy dish, but Henry fills it with the cochinita pibil, solidifying it as one of the best dishes in St. Louis.

Something this beautiful would be at home at a museum, much less a white tablecloth restaurant. It's a path Henry could have easily taken, but instead, he is choosing to share a piece of himself with St. Louis out of a humble food stall. Sureste proves that you don't need flatware, plates and full service to make a great restaurant; food this delicious can speak for itself anyhow and anywhere it's served.