The beloved restaurant has been bringing New York style pizza to St. Louis since 2003

After spending his childhood in New York City, then Puerto Rico, Paul Bishop found himself in Oklahoma City dealing with a very difficult situation: There was no good pizza to speak of. It was something he'd taken for granted living in New York, a place synonymous with slices, and even in Puerto Rico, where he and his family would rotate their meals between outstanding Caribbean cuisine and the excellent pizza offerings they found all around the island. He'd been spoiled by these experiences and would settle for no less than the real deal, so when he showed up in 1970s-era Oklahoma where there was nothing but Pizza Hut and Dominos, he became so crestfallen that he decided he was done eating pizza altogether.

Then, he heard some Italians were opening a place at the local mall.

"There was nothing in Oklahoma City; it was very isolated. But finally, they built a mall, and inside, these Italians were building a pizzeria," Bishop says. "My brother told me they didn't even speak English, but I'd tasted so many bad pizzas that I'd given up. But then they opened, and I went in to check it out; their pizza looked just like what was in New York — and they were selling it by the slice, too. I got a slice of cheese pizza, a soda and I loved it so much I was working there the next day." 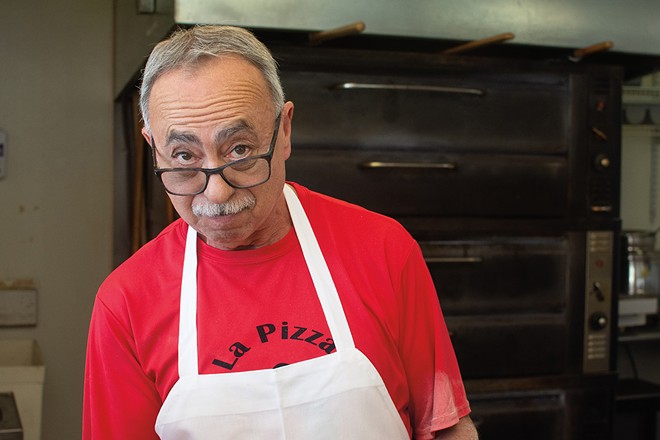 Bishop may not have realized it at the time, but his decision to go to work for that humble mall pizzeria would set in motion a decades-long journey that has culminated in one of St. Louis' most beloved pizzerias La Pizza (8137 Delmar Boulevard, University City; 314-725-1230). Since opening in 2003, the tiny shop, located on the western side of University City near the intersection of Delmar Boulevard and Old Bonhomme Road, has developed a cult "if you know, you know" following among area pizza lovers, especially those who crave a truly authentic New York-style pie.

In retrospect, Bishop can't help but feel his entire life was pointing him in the direction of La Pizza. For as long as he can remember, pizza was more than just something to eat; it was a passion that he carried with him no matter where he lived or what job he had. Oftentimes, his work life matched up with his love for pizza, first at the Oklahoma City mall pizzeria and next, at a similar setup in Texas. Between the two places, Bishop learned the fundamentals of fresh, properly made pizza, taking in their recipes and advice on dough, sauce and ingredient prep.

Bishop soaked in all of this knowledge with the goal of having his own pizzeria, but he took a detour in his early 20s when he began working for a major food service corporation. The job took him around the country, where he would do everything from managing vending machines for large companies to troubleshooting issues at different food service outlets. In 1989, he landed in St. Louis, working in culinary operations at a downtown post office, but he kept his eyes on the area's help-wanted ads to see if there was something else out there. One day, a particular ad caught his eye: A restaurant in Overland was looking for a pizza guy, and he was intrigued enough to check it out.

Andy Paulissen
The small storefront has been welcoming in guests since 2003.

"I thought to myself, 'That sounds interesting,' but I didn't know if I was ready to leave a 13-year career to go on an adventure," Bishop says. "But I figured, 'What the heck?' I went there, applied, and they hired me that same day."

That restaurant, Tino's, was an eye-opening experience for Bishop, whose food work had been limited until that point to low-key pizzerias and corporate food service. At Tino's, he learned about more upscale dining and cooking, thanks to the restaurant's chefs and staff members, a few of whom had worked at the legendary St. Louis restaurant Al Baker's. One of those fellow employees, Tony Rivituso, became a trusted friend and confidant to Bishop, and that relationship remained after Tino's closed about a year later. Unemployed and unsure of their next steps, Bishop got part-time jobs at Bob's Seafood and Racanelli's, while Rivituso devoted himself exclusively to Bob's, where he worked his way up to running the place. The two would regularly talk about opening a pizzeria together, and eventually, things started happening that made those dreams a reality.

"All these things just started happening," Bishop says. "Delivering for Bob's Seafood, we would find all this stuff that kitchens would throw away, like meat slicers that were gummed up and needed to be fixed. We had our basements full of all these little odds and ends, and then our big break came when a country club sold us the two pizza ovens we use today for $250. Getting those ovens for that price made us feel like we were getting a little help from above."

Bishop and Rivituso would get additional help from Bob's Seafood founder Bob Mepham. At a joint dinner party they hosted, the two prepared an elaborate spread of pizzas, including a stuffed seafood pizza that blew Mepham's mind. After everyone ate, Mepham was so impressed that he approached the two friends and asked what they needed to open a restaurant.

"We told him money and he looked at us and said, 'Start looking. I've got you,'" Bishop says. 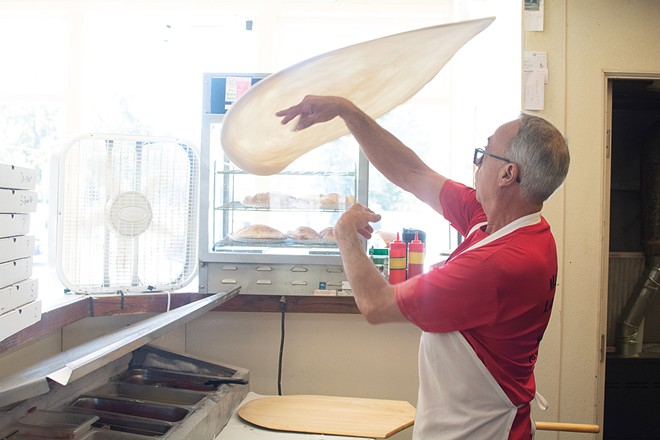 Andy Paulissen
Bishop arrives every day at 5 a.m. to make dough and sauce and prep his ingredients.

In 2003, Bishop and Rivituso opened La Pizza, serving their first pie, a smoked-salmon version not on the menu, to an older French woman who assumed it was a French restaurant because of its name. Bishop admits it was slow-going at first; they did no advertising and relied exclusively on word-of-mouth to spread the news that they were open and ready for business. Over time, and with the help of some favorable write-ups in local publications, business picked up and has never stopped — Bishop notes that it has gotten to the point where the restaurant is so busy, customers sometimes have to call in and pre-order a pizza by 11 a.m. in hopes they can secure one for that evening's dinner. Sometimes, they are already sold out.

Bishop credits the restaurant's success to its focus on the fundamentals. He and his son Paul Jr., who now works alongside him, get to the restaurant at 5 and 4 a.m., respectively, to begin the day's prep work. They make everything from scratch daily, which Bishop believes results in a pizza that is easier to digest than most. He even laughs that he's had customers come in following open-heart surgery for a taste of La Pizza. They just go light on the cheese.

But the real secret to La Pizza's staying power is the passion that Bishop, his son and Rivituso put into the restaurant every single day. Their customers taste this and are always telling the three how much they love their pies. It's what keeps them going after all these years.

"Honestly, I had to wait a long time for my dreams to come true, but I was in no hurry because things just kept popping up to keep me busy," Bishop says. "Maybe it's good to wait and be patient because you can learn a lot by watching people. But really, the secret is I love making pizza. When you love doing what you are doing, it's hard to beat."