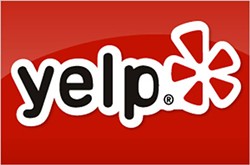 I had to pass along a story from SFoodie, the food blog of SF Weekly, our sister paper in San Francisco. Seems a Yelp user posted a review in which "she" claimed to be a writer for the SF Weekly. She isn't. Never was.

Now, SF Weekly's W. Blake Gray had enough trouble just getting in touch with Yelp officials to discuss the lie, but the response that he finally did receive was even more frustrating.

In an email, a rep from Yelp headquarters told Gray that since the review "appears to reflect the personal experience and opinions of the reviewer, we are leaving it intact." Furthermore, the rep adds, "we don't take sides in factual disputes."

Gotta love the language there: "factual disputes." Of course, there's no dispute. The facts are established. One party simply doesn't recognize it, and Yelp doesn't want to get its hands dirty.

This specific review appears to have been filtered, so it no longer appears when you search the reviews of the restaurant in question -- though you can still read it if you know to look for it. But that isn't really the story. Business owners and Yelp users alike should know that when it comes to the facts, Yelp passes the buck.