Chuck Berry's St. Louis Homes and Properties Before He Was Rich and Famous [Photos] 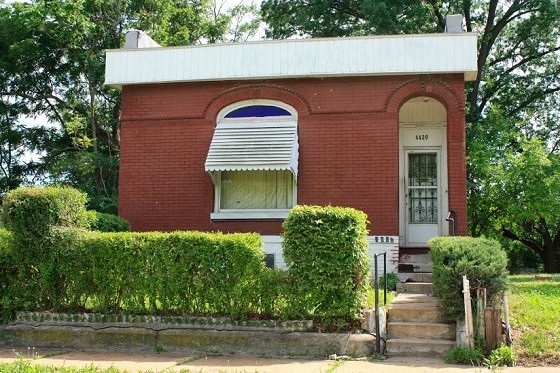 Chris Naffziger
Berry and his family would live here for two short years before moving again.

In the late 1950s Chuck Berry purchased a 35-acre plot in rural St. Charles County where he dreamed of creating a lavish property to rival those of the segregated country clubs he'd seen growing up in St. Louis. The result was "Berry Park," a sprawling compound complete with guest cottages, a nightclub and guitar-shaped swimming pool. Today the 17,000-square-foot mansion he built at Berry Park remains the rock & roll legend's primary residence. He also keeps a second home in the affluent suburb of Ladue.

It wasn't always this way.

Click on the pin drops for a tour of Berry's early homes and businesses.

For the first 30 years of his life (minus a short stint in prison), Berry lived in essentially the same black, working-class neighborhood of north St. Louis. Here is a look at those first St. Louis properties owned or occupied by Chuck Berry -- before all those music royalties came rolling in. Up first: The site of Chuck Berry's birth -- the home where he got his first taste of music. 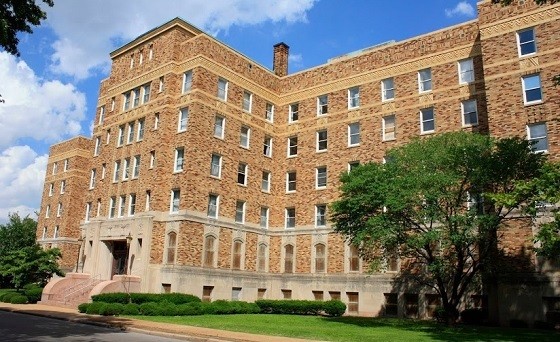 2520 Goode Avenue Chuck Berry was born October 18, 1926, at 6:59 a.m. inside a small home at 2520 Goode Avenue, now known as Annie Malone Drive. The family moved a few years after Berry's birth, and the home was soon torn down for construction of Homer G. Phillips Hospital, which served for decades as the city's only medical center for blacks. Although his time at the Goode home was short, it was here that a young Chuck Berry was first introduced to music. As he writes in his autobiography:

Mother and daddy were of the Baptist faith and sang in the Antioch Church choir. The choir rehearsed in our home around the upright piano in the front room. My very first memories, while still in my baby crib, are of musical sounds -- the assembled pure harmonies of the Baptist hymns, dominated by my mother's soprano and supported by my father's bass blending with the stirring rhythms of true Baptist soul. I was always trying to crawl out of my crib and into the front room to where the rhythm came from. Long before I learned to walk I was patting my foot to those Baptist beats, rocked by the rhythm of the deacons' feet focused on the tempo of the times. Oh! But the feeling it generated still stirs my memory of back when. Hallelujah!

Next: The Berrys move to a home with modern luxuries such as a telephone.

Chris Naffziger
Berry and his family would live here for two short years before moving again.

4420 Cottage Avenue After briefly moving to a home across the street from Berry's birthplace on Goode Avenue, the Berry family settled at 4420 Cottage Avenue, also in the Ville neighborhood. They would stay at this location for just about two years. Recalls Berry of the 4420 Cottage home:

Late in the second grade our family moved again. Daddy found a five-room brick bungalow with full bath, full basement, central heating, and a front and backyard just two blocks away at 4420 Cottage Avenue. We thought it was a palace to have closets and front and back porches. The rent was $25 a month. Mother dug in her savings and added new pieces of furniture that included a new Whirlpool washing machine and a pedal Singer sewing machine that (to my delight) I was invited to pedal while mother sewed. Daddy had some white people install a telephone which brought a million questions from me about its function.

Next: The Berrys move to a home that Chuck will return to time and time again as a teen and young adult. 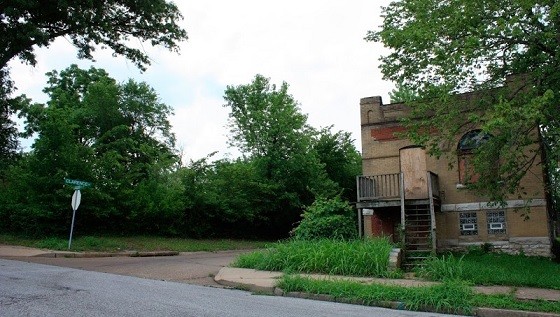 Chris Naffziger
The empty lot to the left is all that remains of the Berry property on Labadie Avenue.

4319 Labadie While Berry was in fourth grade, his family moved again to a duplex on Labadie Street. The Berry family (which in addition to Chuck included his parents, Henry and Martha, and five siblings) would stay at this home for years with Berry returning to the home at the age of 21 (after serving four years in a juvenile center for a carjacking) and, again, a few years later with his new bride, Themetta. The Labadie home has since been torn down, but the property is still owned by Chuck Berry. In his autobiography Berry recalls that the duplex had four rooms with bath and basement and a second floor with the same number of rooms. And it was at this home that Berry first developed his infamous kink. He writes:

One evening I came through the gangway of home and heard water running in the bathroom on the second floor next door. The light from the window was casting down on the roof of our porch. Temptation told me I might finally see a girl's parts, so I hurried to the room and creeped toward the open window to redeem my dream. There, through six inches of raised shade, I saw -- for the first time in my life -- the bare buttocks of a woman about to step into the bathtub. I froze, instantly excited, and crouched stunned and amazed at my long-awaited view of the opposite sex. She even turned around momentarily and allowed a direct view of the front part as she came over to pull the down the shade.

Next: Chuck Berry and his young wife, Themetta, get their first place on Delmar Boulevard. 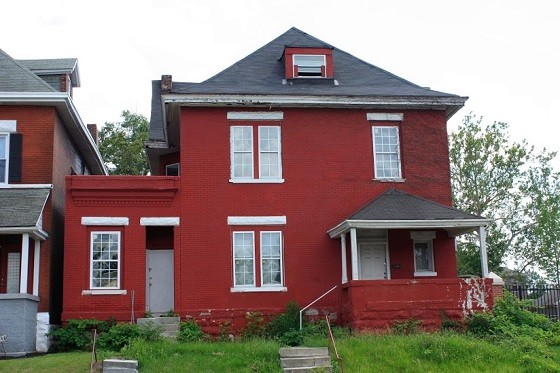 Chris Naffziger
This former boarding house, once owned by Berry's uncle, served as the first home to a newly married Chuck and Themetta.

4352 Delmar Boulevard Chuck and Themetta Berry have been married now for 66 years. But in early 1949 the couple was newly hitched and looking for a place to call their own. They found that first spot in a rooming house owned by Berry's maternal uncle at 4352 Delmar. The couple would stay there for less than a year -- eventually moving back in with Berry's family at 4319 Labadie. Still for a short while, the happy newlyweds had a place of their own and felt that they were really making it -- even if they were not. During this time, Berry was earning $80 a week at an auto assembly plant and another $35 a week doing handyman work with his father. Themetta, meanwhile, brought in another $20 a week working at a cleaners. Writes Berry of their short stint at 4352 Delmar:

We had a 1941 Buick, a refrigerator and were on our way to riches. We were living like the best of the white folks until one evening we were dressed in our "Sunday clothes" on our way to a movie. All the tenants were on the porch chatting as we noticed our parking space. There was no '41 Buick parked where we'd left it at the curb. I boasted about calling the police but knew it had been repossessed by the finance company.

Up next: Berry moves to the home where he'd pen his greatest hits. The now-vacant building was recently placed on the National Register of Historic Places.