Over 25 Years In, the Urge Continues to Sell Out St. Louis Venues 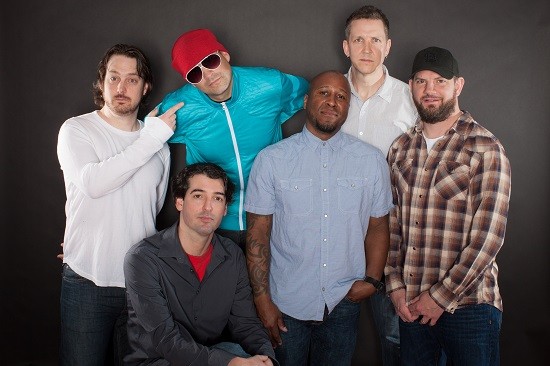 Steve Ewing says his band is doing just fine in 2014.

"We're healthy, we feel good, and we're better writers than we've ever been," the Urge's energetic frontman confirms. "We're pretty lucky in that sense."

The St. Louis band blew up nationally in the mid-'90s on the strength of tracks such as "All Washed Up" and "It's Gettin' Hectic" from 1995's self-released Receiving the Gift of Flavor, culminating in a record deal with Epic Records' Immortal imprint and tours with bands including Korn and Incubus. The group's hit single "Jump Right In" from 1998's Master of Styles (featuring singer Nick Hexum of 311) even landed a spot on the soundtrack to MTV's Daria. After nearly a million records sold, the members of the Urge decided to go their respective ways in 2001, only to reunite a decade later to headline Pointfest 29 and release "Say Yeah" as a teaser for then-in-progress album Galvanized. The band has been selling out shows ever since, playing to a packed house at the Pageant this past Saturday, November 22 — exactly one year after releasing Galvanized to a capacity crowd — and will perform again six days later, this Friday, November 28.

"We'd been talking about it forever, but we would only do it if we had a new album to promote," Ewing says of the reunion. "We had been working on an album for a few years, actually. The record wasn't done, but we decided to release a single so we could do Pointfest and then continue on. As far as coming back and doing the shows — we were all ready to go."

A large part of the band's success comes from the fact that Ewing is a promotional machine. In addition to the Urge, he works with his eponymous solo project, the Steve Ewing Band, which continues to gain fans at a steady pace. And those who may not be as familiar with his musical endeavors might very well know about Steve's Hot Dogs, a business he ushered from a cart in 2007 to two brick-and-mortar shops located on the Hill and in Tower Grove East today.

"The business came into play in 2007," he explains. "Adam [Hansbrough, Steve Ewing Band guitarist] and I were playing pretty much every night — we were probably playing a few hundred shows a year. I was looking for another way to make extra cash. I had the idea to do [the hot-dog cart] via mobile because of all the bar crowds. So I started off just kind of feeling it out. I got good vibes from folks, so I decided to pull the trigger on it."

In a karmic turn hearkening back to the Urge's early days, a large percentage of Ewing's employees are either fellow local musicians who've got their own busy touring schedules or they're budding entrepreneurs who need a paycheck while they work to get their businesses off the ground.

"I had a job when [the Urge] signed our first major deal," Ewing explains. "We were on tour nine months out of the year. In those three months I was back, I could come back to my job. That was pretty awesome."

"I didn't plan on hiring a bunch of musicians," he continues. "It just went that way, and I believe now it will probably stay that way." Now, the business and the band feed each other — those who may not know much about one end up discovering the other.

"I don't really have an endgame with Steve's Hot Dogs," he says. "I don't know, I feel like there's plenty of room for expansion. In fact, we plan on expanding next year."

As for the future of the Urge? Bassist Karl Grable, guitarist Jerry Jost, drummer John Pessoni, saxophone/keyboardist Bill Reiter, trombonist Matt Kwiatkowski and Ewing maintain a presence that's still relevant while continually growing as artists and expanding the group's fanbase. According to Ewing, there are plans in the works for a couple of albums in the next year or so — one consisting of covers and another full of original material.

"We're just going to keep playing," Ewing confirms with a smile. "I think it's a good thing to do — as long as we continue to write and keep offering people new music."