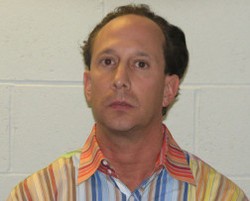 Christopher Frank, accused of exposing himself to an eleven-year-old boy in a Brentwood Home Depot last year, pleaded guilty this week. Police say the suspect got down on his knees in a bathroom stall, exposed his genitals to the boy -- and then watched him use the bathroom.

Here at Daily RFT, we'd like to add one more thing to the list of things Frank should not have exposed: his button-down shirt.

Seriously, what is up with that mugshot outfit? No one should wear that many colors, especially not in a single item of clothing. And that's just the upper quarter of the shirt, who knows what colors those stripes turned further down -- and we can only imagine the pants he might have chosen to match that. Yikes!

A quick Google search shows that this is not his first fashion offense. (Exhibit A, B and C).

Now that we got that out of our system -- court records show that he pleaded guilty on Monday. Maplewood-Brentwood Patch reports that Frank, a 42-year-old Ladue resident who owns the St. Louis marketing firm Cfx Inc., admitted to the class D felony of an adult harassing a child.

He was given 120 days of electronic home monitoring and was placed on five years probation.

The local news site also reports that, as part of the plea deal, he won't be placed on the state's Sex Offender Registry -- but will go through probation as part of a sex offenders program.

Here's a larger version of that mugshot and that shirt.