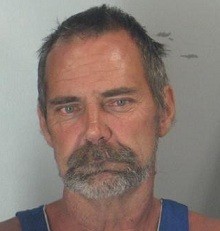 Jefferson County Sheriff's Department deputies were called out to the House Springs Price Chopper in the 4600 block of Gravois Road on Sunday afternoon for an unusual case:  A store employee had discovered a camera in the ceiling of the women's rest room.

An employee also recognized the face of the man allegedly seen on photos contained on that camera. It was purportedly customer Frank Fuchs, 51, of Cedar Hill. Other employees had already detained Fuchs in the store.

Apparently the deputies agreed with the employees' assessment, because they took Fuchs into custody upon arrival.

Today the Jefferson County Prosecuting Attorney charged Fuchs with one count of the invasion of privacy of multiple individuals. His bond was set at $50,000, cash only.

Anyone who may have used the women's room at this Price Chopper on Sunday, July 15, between the hours of noon and 1:30 p.m. (or close to that time frame) is urged to call the Jefferson County Sheriff's Office at 636-797-5515. The police believe Fuchs may have attempted to record other victims throughout Jefferson County.