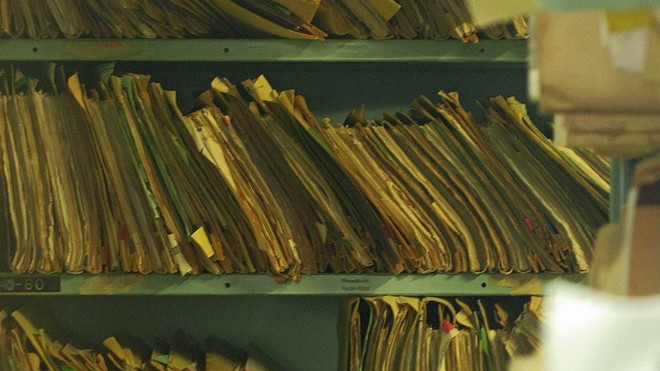 Numerous individuals who routinely request public records from the City of St. Louis are saying that officials who handle public records treat requests like a "game" and issue "bullshit" responses for why records can't be made available.

"It's constant nonsense and game playing," says attorney Emily Perez, who requests public records on behalf of clients as part of her job.

She points to a still-ongoing request she made in April for some emails between officials as typical of the frustrating battle with the city for basic public information.

On April 11 Perez, working on behalf of a client, requested copies of emails between John Moten, the city's interim director of personnel, and Director of Public Safety Dan Isom during a three-week period.

The initial response was that the custodian of records for the Department of Personnel didn't have enough information to fulfill the request.

Perez wrote back asking how this was possible, she just wanted emails exchanged between two individuals between a specific time period.

The custodian of records then replied that "additional time is necessary to locate and identify any records responsive to your request, and … a review of any such records will be conducted to determine whether those records contain any otherwise legally protected information." The records, if any existed, would be available no sooner than May 25, about six weeks away, the message said.

On May 25, the city sent Perez a bill for her request, and she mailed a check the same day.

Two weeks later, having not received the records, she asked for an update.

The city sent Perez a response containing the same language verbatim that she had received before: "additional time is necessary to locate and identify any records responsive to your request..."

The department would need until July 15, an additional six weeks, to process the records.

Perez fired an email back, saying that she had been given this exact response already once before. In short, she wondered, why was there more time needed for records that had already been located to be located again?

About six weeks went by without her getting a response. An update from the city came on July 15 and it was the familiar, what she calls “canned” reply: "additional time is necessary…."

The new date when her records ought to be ready: August 25, 2022, more than 20 weeks after her initial request.

"It seems to me that instead of doing the best to fulfill the spirit of the Sunshine Law, their M.O. is to play the game and see how far they can push things and get away with things that might be allowable under the law," Perez says.

As more evidence of this "game," Perez cites another recent request she made for a salary study that the city had commissioned.

Her request was initially denied, so she filed a complaint with Missouri Attorney General Eric Schmitt, a man few consider to be a friend of the state Sunshine Law.

The attorney general's office, though, sent a letter to the city asking for more information and giving them a specified deadline before which they needed to respond.

"The city provided me with the salary study around four o'clock in the afternoon of the very last day they had to respond to the attorney general's letter," Perez says.

Attorney Mark Pedroli says that he, too, has gotten frustrated with the city's process of handling Sunshine requests.

"Although the current mayor has perhaps been one of the most transparent mayors in recent history, nonetheless the the system built by the City Counselor’s Office to respond to Sunshine requests is completely dysfunctional. It violates the Sunshine Law on an almost daily basis, and nothing short of destroying and rebuilding it will make it compliant with the Sunshine Law," Pedroli says. "They're lucky they have evaded a class action lawsuit at this point."

The Sunshine Law requires that custodians of records respond to a records request "as soon as possible but no later than three business days" after receipt, according to the state attorney general. If the records can't be produced in three days, the custodian of records must "explain why there is a delay and provide the earliest date the records will be available."

Journalists have also expressed annoyance over the city's handling of public records requests.

In November, former Post-Dispatch and current Propublica reporter Jeremy Kohler wrote about the issue on Twitter saying it would take six weeks for records he'd requested to be converted to a PDF.

He ended the tweet saying: "This is not legal."

Perez says that she, too, has been told that the file conversion process will take much longer than she feels is reasonable.

The city manages its records requests using a program from the Illinois-based company GOVQA. Anyone who makes an account can use the GOVQA interface to request records from almost 40 different departments in the City of St. Louis.

Desideri says that the reason there can still be a significant delay even after the requestor has paid the fee for the records is because the city used to do all the work of collecting and redacting records only to have the fee go unpaid, rendering the preparation work a waste of resources.

But now the records aren't sorted or reviewed until the requester pays the fee.

As for the issues of the process being intentionally obstructive — what Perez called the city playing games — Desideri says those complaints should be directed to the custodian of records for the department in question, for whom the city's Sunshine Law coordinator is really just a go-between.

No matter who is to blame, it isn't just lawyers and journalists with gripes about the city's handling of record requests.

Tim Sommerfelt is an EMT in Cleveland who is the secretary for a labor union of first responders there. He read a July 10, 2022, article in the St. Louis Post-Dispatch about inefficiencies in St. Louis City's EMS. The article, by Jacob Barker, cited a 2014 report the city had commissioned about its EMS and that the Post had later obtained a copy of. Sommerfelt thought it would be no problem getting his hands on a copy as well.

"A lot of times we can learn a lot from other cities," Sommerfelt says. "When I see a report like this, I'm like, ‘well, let's get a copy of the actual report.’"

Using the GOVQA platform, Sommerfelt selected "Fire Department - EMS" as the department he was seeking records from and made his request.

The request was denied. The response said there were "no responsive records" and encouraged Sommerfelt to resubmit his request to "Fire Department - Investigations."

A request to "Fire Department - Investigations" was also denied, this time with a difficult to parse explanation. Sommerfelt was told he needed to submit the request again, this time to "the City of St. Louis Department that ordered and paid for the study."

But, Sommerfelt had no idea which department that was. And with his records requests returning nothing but denials, he was unsure how to figure it out.

Sommerfelt says he felt like the city was being "intentionally difficult."

"You've already released the report, so there's no need to redact it," Sommerfelt says. "We know it's a public record, and you gave it to somebody, so why can't I just get a copy of it?"

Sommerfelt says that he spoke on the phone with the city's Sunshine Law coordinator. He describes the conversation as "heated."

Sommerfelt resubmitted the request, this time to 35 or so different city departments.

The Department of Public Safety fulfilled Sommerfelt's request and sent him the report.