St. Louis Standards: Ted Drewes Has Been a Legend for 93 Years 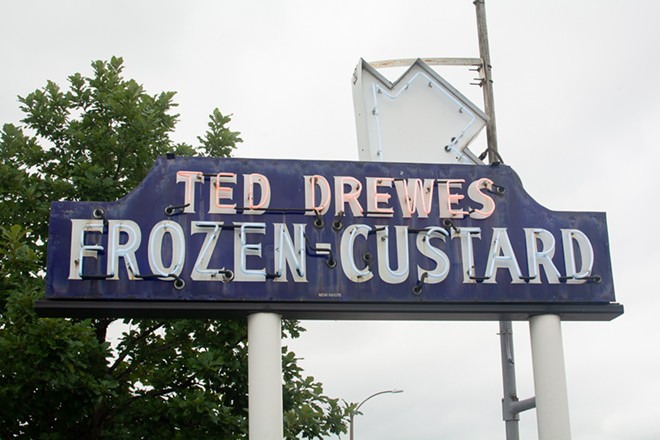 Travis Dillon, owner of legendary St. Louis custard chain Ted Drewes, can be found most days inside the Chippewa shop. More likely than not, he'll be mixing custard base alongside the rest of the employees — nearly all of whom are at least a few decades younger than him.

Dillon, dressed in the typical uniform of pastel-yellow Ted Drewes shirt and baseball cap, says he only recently started taking weekends off from the store since he started working there over 40 years ago.

"It's the most wonderful feeling," Dillon says. "I feel like I'm half-retired!"

Far from actual retirement, however, Dillion still has a laundry list of tasks every day in order to keep Ted Drewes running. He manages the 70 employees it takes to keep the Chippewa location staffed in the summertime, pays bills, contacts suppliers and, of course, lends a hand in the kitchen when needed.

That personal touch has been key to upholding the ethos of the company as a local, family business. The shop is a city staple, a St. Louis-famous chain that aims to stay consistent in both lineage and taste. 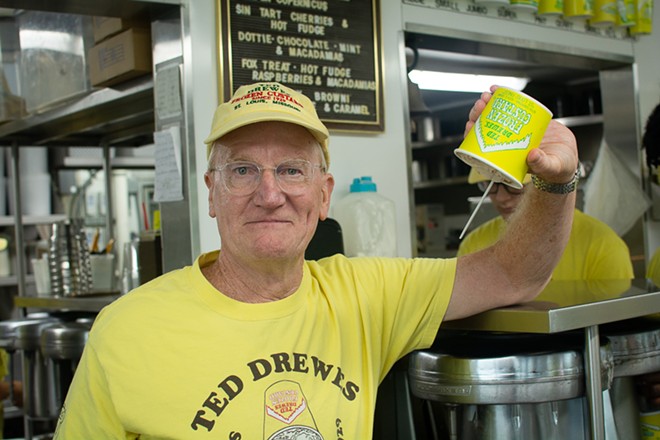 Dillon co-owns the shop with his wife Christy Dillon, the granddaughter of Ted Drewes Sr.

They met in college, at what is now Truman State. Dillon was an accounting major, with no plans to take over a business. He was aiming to be an accountant and work for a firm.

Christy encouraged him to stay away from the family business because, having grown up in it, she knew that it could quickly take over both your work and home life. Dillon was on the same page initially. He just helped out his father-in-law once in a while.

"It got to be two nights a week, then three, then four," Dillon says. "My wife said, 'If you're going to work that much, you may as well go help him.' [Ted Drewes Jr.] offered me a full-time job."

Most aspects of the shops have stayed the same since Drewes Sr. started selling custard nearly a century ago in 1929.

The custard comes in one flavor –– vanilla –– and customers can choose a concrete, shake, malt or a sundae (which Dillon pronounces, with a slight Missouri accent, as 'sunduh'). The shop offers a few dozen mix-ins, with favorite combinations, such as Cardinal Sin (cherries and hot fudge), advertised at the top of the menu.

Another thing that the Drewes drove home was to pay careful attention to the details. Dillon takes this to heart, having a bite or two of custard every day to make sure it's consistent with his standards and making sure to pass on that level of care to the entire Ted Drewes family.

"If you're handing out a hot fudge sundae, and you put pecans on it, the fudge will drip over the side," Dillon explains. "So teach and train your employees to wipe that off."

Though many of those details are about customer service and products –– concretes should be thick enough to stay put when the cup is momentarily flipped upside down, call out orders from largest to smallest –– Dillon also keeps track of the less tasty behind-the-scenes to-dos of a family business, such as making sure bills are paid and sales are up to snuff. 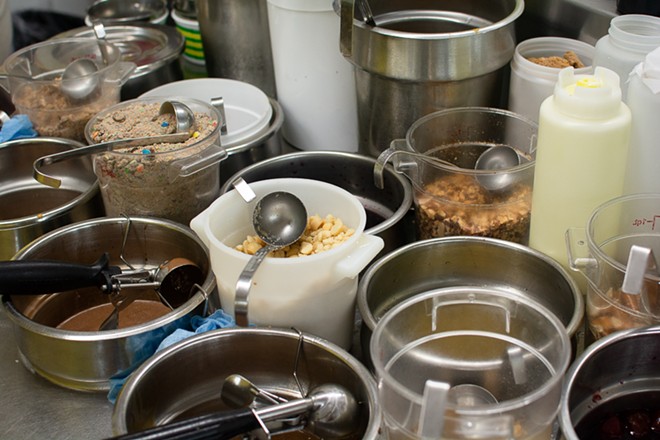 Andy Paulissen
The store offers one flavor — vanilla — and a host of mix-ins.

But, most importantly, Dillon safeguards Ted Drewes as a strictly St. Louis enterprise.

"It's always been a philosophy to keep it in the family," Dillon says. "Why expand when the income from our business is enough for our family? That's really our goal –– to be happy and enjoy a fun life with [our] children and grandchildren."

What has changed, however, is the local fame Ted Drewes has received since its opening.

"Ted Sr. didn't believe in advertising. He believed in word-of-mouth," Dillon says. In the '70s, Ted Jr. changed that by buying ads in newspapers and reaping the benefits of higher sales.

These days, Ted Drewes advertises on TV, radio and in a handful of magazines. The places you can buy Ted Drewes ice cream have expanded, too, to a few other local delis and restaurants. You can even buy a cup of custard right after stepping off the plane in Lambert airport from a specialty vending machine kept at a precise, steady temperature.

"When you sell our frozen custard, it needs to stay below zero. So that's another detail," Dillon says.

Unfortunately, a larger factor than temperature hit Ted Drewes in 2020 –– the pandemic. As a result, the Grand location was unable to open this summer, due to a lack of staff. Dillon says they would need about 90 employees total for both locations to be up and running smoothly.

In the end, Dillon prioritized the Chippewa location, which has gained popularity likely due to its placement on Route 66. Built in 1941, Chippewa is now considered Ted Drewes' "main store," Dillon says, and needs roughly 70 employees in order to function. 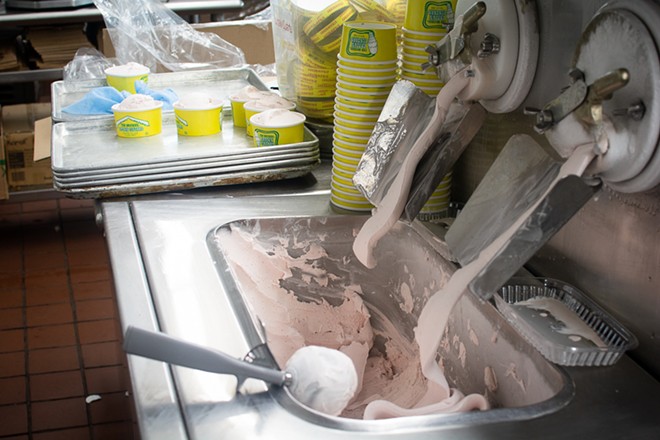 The shop's current employees can be as young as 15, with many working during their high school or college summer breaks. In the 1990s, Ted Drewes created an educational assistance program. Now kids attending college in St. Louis can work a certain number of hours per week in exchange for tuition help. "We want you to help us, so we will help you," Dillon says. "Without the hard work of our employees, there's no way this company would exist."

Dillon says that he interviews most employees himself, looking for enthusiasm and eye contact in order to offer someone a position.

"It's important as the owner of a family business to know your employees," Dillon says. "I want everyone to know who I am, and I want to know who they are."

The order windows — nine in all — at the Chippewa location are almost always busy. During a weekday, four or five will be open for the families crowding around for a sweet treat. On hot weekend nights, all nine might be open to accommodate regulars, tourists and after-work crowds. Inside, the employees, in their yellow shirts, work as if in a beehive, buzzing with orders and totals and instructions to each other in a complicated but orderly dance.

The custard itself is thick and creamy and melts fast on a humid day. Custard contains over a percent of egg yolk (at least 1.14 percent, to be exact), producing a richer flavor than typical ice cream, which often doesn't include any egg. Ted Drewes offers a few different serving sizes that range from micro — a perfect small treat — to large, a fountain-drink cup filled to the brim. 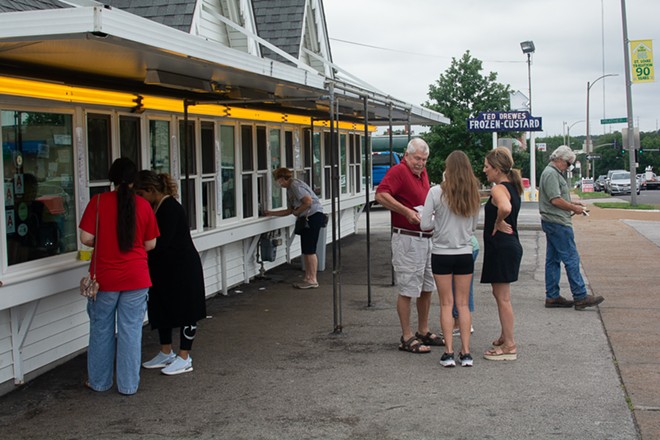 Dillon has already planned who is going to inherit the Ted Drewes kingdom next: his two sons, now in their late 30s. But while he enjoys his weekends off, playing with his six grandchildren and fishing, Dillon doesn't plan to quit anytime soon.

"[My sons'] intentions are to continue the business [once] the Lord has called me home," Dillon says.

Till then he wants to physically be in the shop, mixing custard and taking orders. Even after that retirement, Dillon sees himself still on the business side of things, if only from afar, "for as long as I'm able to think about it."